Book Spotlight: From the Earth to the Shadows by Amanda Hocking 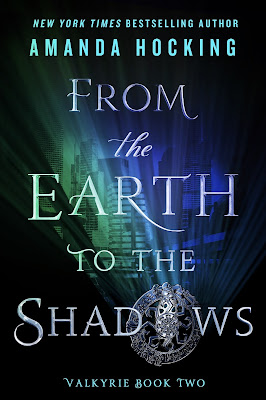 From the Earth to the Shadows
(Valkyrie #2)
by Amanda Hocking
Release Date: April 24, 2018
Wednesday Books

Malin’s mission to avenge her mother's murder has uncovered dangerous secrets. As a Valkyrie-in-training, Malin must slay immortals who’ve had their time, to maintain balance between humans and immortals. But her quest could destroy earth’s stability – and unleash chaos.

Just when she needs to focus, her friend Asher is in grave danger. He’s been dragged into the underworld, where vengeful immortals plot revolution. Malin believes her feelings mustn’t distract from her goal – but is desperate to rescue him. So she ventures into the darkest of realms, knowing she may not survive. With new allies at her side and new enemies ahead, Malin will face terrible choices. She’ll have to keep her head – or be ruled by her heart.

Add From the Earth to the Shadows on Goodreads.

An Excerpt from From the Earth to the Shadows

The air that fogged around me was thick enough that I could taste it—earthy and wet, with a trace of salt. It stuck to my skin, which was already slick with sweat, and that only seemed to attract more insects. They buzzed around me, leaving burning little bites in my flesh. I wanted to swat them off, but I couldn’t. I had to stay perfectly still, or the Kalanoro would spot me too soon.

The oversaturation of green in the jungles of Panama had been a strange adjustment from the smog and bright lights of the city. Out here, it was an endless emerald sea: the plants and trees, the rivers, were all varying shades of green—even the sky was blotted out by a thick canopy of leaves.

This wasn’t where I wanted to be, crouched motionless in the mud with a giant millipede crawling over my foot. Not when Asher was still gone, held captive in Kurnugia by the underworld goddess Ereshkigal and her mad centaur boyfriend, Gugalanna. Not when the fate of the world felt heavy on my shoulders, with Ereshkigal attempting an uprising that would unleash the underworld on earth.

It had only been three days since I’d gone to the Gates of Kurnugia, along with Oona, Quinn, Asher, and Atlas to aid me. I’d wanted to avenge my mother—and I had killed the draugr that had killed her—but all of that may have set off a chain of events that would bring about the end of days.

And I had lost the guy I … well, not loved. Not yet. But I cared about him. All I wanted to do was rescue him. But I couldn’t. There was too much at stake. I couldn’t let my heart get the best of me. I had to hold it together, and follow my orders.

After Gugalanna had pulled Asher down into the underworld where I could not follow, the rest of us had gone to Caana City in Belize. It was the safest city near the Gates of Kurnugia, and Oona needed medical intervention to survive. She was on the mend now, and that’s why I had left her behind, with Quinn and Atlas.

I didn’t want to risk losing them the way I had Asher, and I was on a special assignment, coming directly from the Valkyries’ highest authority—Odin.

Odin had found me outside of the hospital where Oona was being treated. I had never met him before, and, like most of the Vanir gods, he changed his appearance to suit his needs, so I hadn’t recognized him.

He towered over me in his tailored suit, with his left eyelid withered shut. He had a deep rumble of a voice, with a softly lilting accent, and a grim expression. His large raven, Muninn, had been watching over me, but when I tried to press him for a reason why, he had told me that there wasn’t time to explain.

“I need you to go deep into the heart of the jungle, where no man dares to live,” Odin explained, as we had stood in the eerily silent parking lot in Caana City. “You must retrieve something for me.”

“Why can’t you retrieve it yourself?” I asked bluntly. I wasn’t being rude, but the reality was that Odin was a powerful god, and I was just a young mortal Valkyrie-in-training. He had far more knowledge and power than I could ever hope to have.

“I’m not allowed to meddle in the affairs of humans or any of the other earthly beings,” Odin clarified.

“But…” I trailed off, gathering the courage to ask, “What is this you’re doing now, then? Isn’t directing me to get something for you the same as meddling?”

A sly smile played on his lips, and he replied, “There are a few loopholes, and I think it’s best if I take advantage of one now. If you want to save your friend, and everyone else that matters to you, you need to act quickly.”

“What is it that you need me to get?” I asked, since I didn’t seem to have a choice.

“The Valhallan cloak,” he explained. “It was stolen centuries ago by a trickster god—I honestly can’t remember which one anymore—and he hid it with the Kalanoro of Panama.”

“The Kalanoro?” I groaned reflexively. Having dealt with them before, I already knew how horrible they were.

If piranhas lived on land, they would behave a lot like the Kalanoro. They were small primate-like creatures, standing no more than two feet tall, and they vaguely resembled the aye-aye lemur. The biggest differences were that the Kalanoro were tailless, since they lived mostly on the ground, and they had razor-sharp claws on their elongated fingers and a mouth of jagged teeth they used to tear apart the flesh of their prey.

“What is the Valhallan cloak, and how will I find it?” I asked Odin.

“You’ll know when you see it. It’s an oversized cloak, but the fabric looks like the heavens. The rumors are that the Kalanoro were attracted to the magic of the cloak, though they didn’t understand it, so they took it back to their cave,” Odin elaborated. “They apparently have been guarding it like a treasure.”

“So I have to go into the treacherous jungle, find the man-eating Kalanoro, and steal their favorite possession?” I asked dryly. “No problem.”

Which was how I ended up in the jungle, alone, in the heart of Kalanoro country—at least, that’s what the nearest locals had purported. In front of me, on the other side of a very shallow but rapidly moving stream, was the mouth of a cave. The cave I hoped was the home of the Kalanoro, but I was waiting to see one for official confirmation.

Sweat slid down my temples, and a large dragonfly flew overhead. The trees around me were a cacophony of sounds—monkeys and frogs and birds and insects of all kinds, talking to one another, warning of danger, and shouting out mating calls.

Back in the city, beings and creatures of all kinds lived among each other, but there were rules. The jungle was not bound by any laws. I was not welcome, and I was not safe here.

I heard the crunch of a branch—too loud and too close to be another insect. I turned my head slowly toward the sound, and I saw movement in the bushes right beside me. Tall dark quills, poking out above the leaves, and I tried to remember if the Kalanoro had any quill-like fur.

I didn’t have to wonder for very long because a head poked out of the bushes, appearing to grin at me through a mouthful of jagged fangs and a face like an alien hyena. The leathery green skin, mottled with darker speckles, blended in perfectly with the surroundings, with a mohawk-like row of sharp quills running down its back.

It wasn’t a Kalanoro—it was something much worse. I found myself face-to-face with a Chupacabra.


Copyright © 2018 by Amanda Hocking in From the Earth to the Shadows
Reprinted with permission from Wednesday Books.