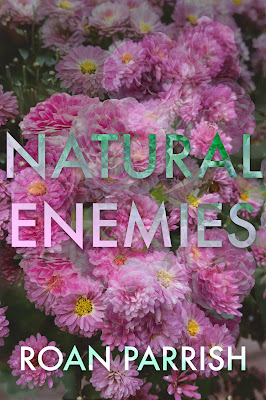 Buttoned-up botanist Stefan Albemarle has felt like an outsider his whole life. As a result, he mostly keeps to himself—makes it easier not to notice that no matter how he tries, people think he’s a know-it-all and a snob.

Freewheeling urban gardener Milo Rios has worked hard to get where he is, and he’s passionate about his job at the Brooklyn Botanic Garden. He can get along with almost anyone, but no one has ever made him care enough to stick around.

When Stefan and Milo meet on Milo’s tour of the Botanic Garden, it’s hatred at first clash. But hatred quickly turns to lust as Milo shows Stefan how exquisite it can feel to lose the control he’s clung to for so long. As Stefan’s mask begins to slip, Milo sees a deep vulnerability in the prim academic. Once he’s experienced Milo’s world, Stefan can admit that he wants more from life than professional success. If they can work together, Stefan and Milo just might be able to cultivate the future they both yearn for. 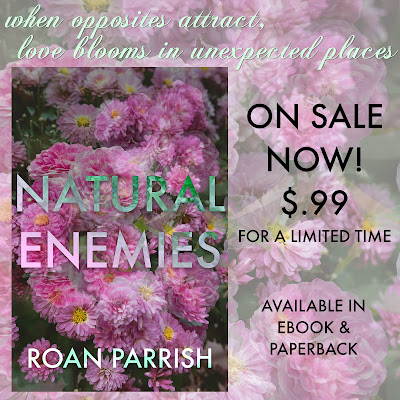 An Excerpt from Natural Enemies
“Why did you come here, man, seriously? What is this?” Milo asked.

This close, I could see the flecks of amber in his brown eyes, could see the softness of his lashes and the way one of his front teeth was in front of the other. A curl of his hair hung over his forehead and he had a smudge of dirt on his chin. As I watched, his eyelids drifted half shut and I found myself completely unable to look away. I was frozen to the spot and my heart began to race.

“Unless,” he said slowly, stepping right up to me, “you didn’t come here to talk shit at all. Maybe you came here for something else.” His gaze dropped to my mouth and he bit his lip. “Nothin’ to say now?”

I blinked madly, trying to sort things into brand-new categories. Was Milo…hitting on me?

I took a step backward as Milo stepped forward, then another, as if we were dancing. Then my shoulder blades hit the fence and Milo was so close I could smell him—fresh soil and sunlight and the sweetness of light sweat.

We were the same height, so when I looked at Milo, he was looking right into my eyes.

“What’s it gonna be, Stefan?” Milo’s voice curled around my name and it felt like a hand around my cock I was so suddenly turned on. I took a shuddery breath and Milo’s mouth curved in a knowing smile. “Huh,” he said. “That right?”

I closed my eyes and bit my lip. I was so hard and so mortified. How could this be happening? Things like this did not happen. Not to me.

Milo leaned in close and I opened my eyes to see hunger in his expression.

Then he was kissing the hell out of me, mouth hot, tongue slick, a hand at my throat and the other sliding up my back to drag us together.

A shot of pure lust blasted through me and I grabbed at Milo too, squeezing his hips and pulling us together. My head fell back against the fence as he fed on my mouth and I heard myself cry out as his hand slid down to my ass.

I felt like I was dissolving into velvety heat everywhere we touched—mouth and throat and ass and groin—and suddenly it was too much. It had been so long since anyone had touched me. I was so close. I was going to come. 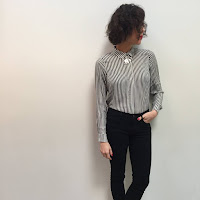