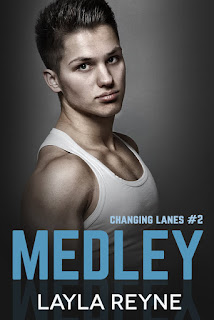 Here's the thing when the first book in a series blows you away: expectations for the second book become undoubtedly (and maybe unfairly) high. And when the author happens to be a go-to favorite who's always surpassed any and all expectations? Well, the bar is exponentially raised. That was the case with Layla Reyne's second novel in her Changing Lanes sports romance series. Relay earned a spot on my year-end list of top favorites with its angsty second-chance love story that had bites of humor to it alongside a strong sports element interspersed with the romance. Alex Cantu and Dane Ellis also make up one of my favorite couples in the sub-genre, and that's saying a lot. Then there were supporting characters Bas Stewart and Jacob Burrows, who shared a strong connection in this first book and who I knew would be getting their own story told in the second one. All of that made Medley one of my most anticipated reads for the second quarter of 2018. The fact that I got the galley for this early was a bonus. Then I read it, and well, unfortunately, it kinda missed the mark.

Twenty-six-year-old Sebastian Stewart is heading to his second Olympic Games, and he's hoping to NOT repeat what happened the last time. He made poor choices and it ended up costing his team the gold in the medley relay. He's learned his lesson, and this time around, he intends to put everyone first--a concept that nineteen-year-old Jacob Burrows is quite adept at. He may be one of the rookies on the team and his being the youngest may have earned him the nickname "Pup", but Jacob's selflessness when it comes to his family and his team makes him mature beyond his years. However, behind his easygoing manner and pirate-themed quips is a young man who worries about his father and has yet to find acceptance from a significant other, especially when it comes to his bisexuality. The person who gets him most is his mentor on the team, but Jacob's crush on Bas has the vet pulling away. Keeping his distance is what Bas believes is best for both Jacob and the team. When everything Jacob's worked for is at risk of falling apart and Bas's own past comes back in a way that neither Jacob nor Bas can ignore, will it be too late for Bas to dive in and rescue the young man he's falling for?

I mentioned that the book missed the mark, but don't take that to mean that it was an awful read. It wasn't. Again, I need to stress that I had expectations, and while some of those were not met, others were. Also, while this book may not have been as fantastic as the first one in the series, I still enjoyed reading it. I liked getting to know Jacob and Bas even better here, and I appreciated the back stories that they brought with them--Jacob his bisexuality and caring for his father and Bas his past relationship and family history of infidelity. I loved both guys and I loved how much they cared about each other AND their team PLUS their remaining family. I also more than appreciated the portions of the story that focused on the swimming and being at the Olympics. Bonus points also go to peeks at how Alex and Dane are doing as a couple. So, why did it not meet my expectations? I wanted more of Bas and Jacob evolving into an actual couple. Yes, Bas had his reasons for pushing Jacob away, and yes, their feelings continued to develop even during that time, but so much of their time was apart rather than together. While four stars may not seem like all that bad of a rating for a book, it pains me to award Medley "only" four stars because it is a Layla Reyne book and because Relay was exceptional. ♥

Read my reviews for the Changing Lanes series: