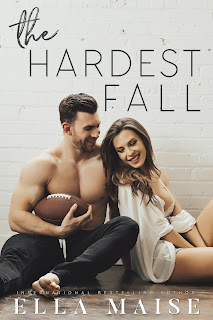 His smile turned playful and he stood up.

The first and last time I read an Ella Maise novel was in mid-2016 when she released To Hate Adam Connor, a book that I loved and which ended up being one of my favorites for that year. And I know that I mentioned in my review for that book that I would read To Love Jason Thorn, but...I haven't gotten around to it yet (cringe...bad Jen!). When I tell you "so many books, so little time," it's not no joke. But here I am, having had the privilege to re-acquaint with Maise's writing because it was definitely an opportunity I'd be silly to squander. It's taken almost two years for me to read something she's written again, and what a re-introduction it's been! Cheesy as it may sound, I absolutely fell for The Hardest Fall, her brand spankin' new college romance that's uniquely quirky and oh-so-cute.

Zoe Clarke was a freshman when she was dared to kiss sophomore and football player Dylan Reed. He turns her down, but his curiosity is piqued yet he fails to get her name. A year passes before they see each other again, and this time around, he not only learns her name, but he's ready to give her that kiss--one that she turns down. Yet another year passes, and now, Zoe and Dylan find themselves in the same apartment. They unexpectedly become roommates and, as Zoe insists, buddies. The more time they spend together, the better they get to know each other, forging a surprising closeness. However, the thrum of attraction between them also becomes stronger. Third time should be the charm, but the same stumbling block the first two times stops Dylan from pursuing the girl he wants--there's someone else. Zoe claims it's complicated, but Dylan has no idea just how complicated it all truly is.

I love how much of a slow burn this romance was! Yes, the attraction was always there, but it was something that wasn't overplayed or over-emphasized. We know it's there. This allowed more focus on Dylan and Zoe building an honest-to-goodness friendship that would serve as the foundation of everything that was already there and would later grow to become more. I adored these two main characters and their banter had me smiling. Zoe rambled quite a bit, which I had great affection for because it's a tendency that I share with her as well. She was such a great counterbalance to the quieter Dylan, although Zoe also had her more introspective moments and Dylan has far more gregarious ones. I confess that I thought one thing in the first few chapters and was shocked when I realized just how wrong I was (sorry, Zoe!). An author who can keep me on my toes totally deserves kudos.Their love story was beautifully extraordinary, and it's one that brought a more than satisfied grin on my face by the end. I'm holding out hope that certain supporting characters will get their own stories told, specifically Kayla and Jared,  Zoe's best friends, and JP and Chris, Dylan's closest friends. Fingers crossed! Five-plus stars go to The Hardest Fall. ♥

Purchase The Hardest Fall on Amazon.