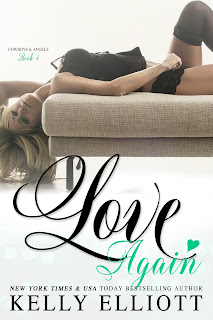 Kelly Elliott’s Cowboys & Angels series is back with the story of the next Parker sibling, thirty-two-year-old Waylynn, who finds Love Again (see what I did there?) with her brother Cord’s best friend, twenty-six-year-old Jonathon Turner. They’ve known one another for years, but it’s only recently that Waylynn sees Jonathon in a whole new light. He’s always had feelings for his best friend’s sister, and now that they’re both single, he doesn’t intend to let anything get in his way. There’s no denying that Waylynn is drawn to Jonathon, but she also can’t deny the fact that he’s six years younger than she is or that she’s already made the mistake of loving someone who ended up belittling her and breaking her heart. Can she risk her bruised and battered heart once again with someone like Jonathon, especially when Waylynn slowly but surely realizes that should he ever shatter her heart, there may not be any pieces left for her or anyone else to put back together?

Out of the four already released novels in the Cowboys & Angels series, this newest one is my current favorite. From Waylynn being a few years older than Jonathon to the direction their story took, I’d be hard-pressed to pinpoint one thing about this book that I didn’t like. The Parker family certainly has become one of my all-time favorites, with each of the siblings with a story to tell, and with every new release in this series, I find myself looking forward to finding out how the next sibling is going to be getting their happily-ever-after. In the case of Waylynn and Jonathon, I very much appreciated that there wasn’t any sort of rush to them falling all over each other, but neither was there a feeling of meandering along. Jonathon was such a great partner for someone like Waylynn because he gave her that prod to move forward and give love another chance while also being patient and supportive. Kelly Elliott has delivered a five-starred winner with Love Again.