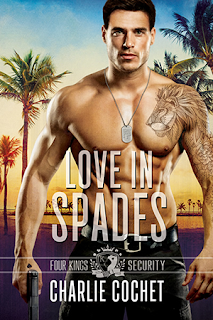 He couldn't have just one night with Colton. As he ran his fingers through Colton's soft hair, he accepted how well and truly fucked he was. He cared about Colton, waned more, but the odds were not in his favor. This was where he'd fold, but how could he? How could he walk away from Colton now? Simple.

I've had Charlie Cochet's THIRDS series at the top of my to-be-read (and to-be-listened-to!) list for a couple of months now, but when her Four Kings Security series starter was up for review, there was simply no way I could pass up the opportunity to finally pop my Cochet cherry. Oh boy, but how this romantic suspense novel made me come to a couple of realizations. First, I've clearly been missing out because if all of my Cochet's books are as on-point and well-written as this one, I should have started reading her books long ago. Second, Love in Spades has hit the rarefied trifecta when it comes to series starters: it has a standalone story worth reading, it introduces readers to a cast of characters that pique their curiosity, and it makes you so damn addicted to the author's brand of storytelling. Simply put, this novel had me expecting a great deal going on because of the author's reputation for this kind genre, and now, it has me demanding that the next Four Kings Security novels follow suit (pun unintended). Fans and readers were dealt a winning hand with this all-new Cochet read.

At thirty-nine, former Special Forces Anston "Ace" Sharpe is still at the top of his game. He's one of the owners of Four Kings Security and the firm continues to create a name for itself while maintaining a stellar reputation for being the best in the business and continuing to think ahead in terms of advanced security measures for their clients. When the patriarch and current chairman of Connolly Maritime comes in to request the services of Four Kings, Ace and his three fellow "kings" recognize how much of an opportunity this could prove to be for them. All they'd have to do is provide 24/7 protection detail for Colton Connolly, the incoming chairman once his father retires, and a lucrative long-term contract with the family-owned company will be theirs. However, the thirty-one-year-old Colton doesn't think he needs protection even if the threatening letters he's been receiving prove otherwise. He sees the Four Kings as nothing more than a nuisance, and Ace in particular tries his patience. Maybe it's because he's undeniably attracted to his new bodyguard. But while the attraction is very much mutual, Ace knows there's no way he can indulge in it, not when his reputation and that of the security firm he and his brothers-in-arms have worked so hard for PLUS the life of the man he's falling for are at stake.

I loved every single thing about this book! From the romance and sex to the action and suspense, this series starter had a story that kept my attention snagged and my blood pumping. I had a short list of suspects as far as who Colton's stalker was, and while the name of the villain was on my list, the motivation for this person's actions had me pausing for a bit because I certainly didn't expect it! Who doesn't love an author that can keep them on their proverbial toes?! Charlie Cochet did exactly that with the well-paced story, but she also gave us two main characters who were multi-layered and interesting as well as having the kind of chemistry that readers should always demand in the books they read. There's the rest of the cast of characters--from the three other owners of Four Kings--Ward Kingston, Russell McKinley, and Eduardo Morales, aka King, Red, and Lucky, respectively--and the two other surviving members of their SF team, Jack and Joker, to those closest or have a connection to Colton, namely, Frank, Lazarus, and Joshua. While I wouldn't necessarily call them scene stealers, their presence was always notable, and I look forward to getting to know them even better as the series proceeds. The back story concerning the SF team that survived and those who were lost was heartrending, but it also gave me a better understanding of how amazing the men of Four Kings Security are. Can you tell how smitten I am already? I'm highly recommending you read Love in Spades, which I'm awarding five-plus stars to. ♥

Purchase Love in Spades on Amazon.