Review: I Dare You by Ilsa Madden-Mills (The Hook Up #1) 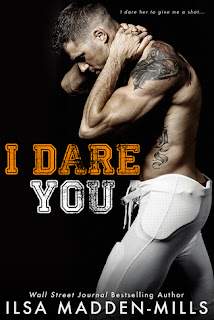 They say that the first person that you kiss at a party becomes the one person you end up never forgetting...or at least that's what football player Maverick Monroe told fellow freshman Delaney Shaw right before he kisses her at a bonfire. Fast forward two years later, and Delaney starts getting text messages from an unknown number. The only clues he gives her as to his identity is that he's an athlete and that they know each other. She can never say no to a dare, so not only does she dare herself to continue texting the guy, but he throws dares her way as well. There's something about him that rings familiar, but he couldn't possibly the same star football player who kissed her a couple of years ago. She isn't the type of girl Maverick would go for, plus Delaney's sworn off athletes in general and football players in particular, thanks to her football player boyfriend sleeping with her arch-nemesis.

I Dare You is the first novel in The Hook Up, the brand-new sports romance series from bestselling author Ilsa Madden-Mills. Set in the world of college football, this series starter kicks off with college freshman Delaney Shaw getting kissed by fellow freshman and football player Maverick Monroe at a bonfire. However, as wondrous as that kiss was, they both lead seemingly separate lives for the next two years, only intersecting when Delaney ends up with a boyfriend who happens to be Maverick's teammate, but they split up when she catches him cheating on her. I think one of my favorite things about this book had to do with the fact that Maverick was far more aware of Delaney and what was going on with her than she with him. Kudos to the guy, as well, for not making a move on her out of respect for the fact that she was in a relationship and that her then-boyfriend was a kicker for the team.

This was an enjoyable lighthearted romance that had flirty and fun moments. There were times where I felt as if things were rushed, almost as if Delaney and her anonymous texter had jumped from the I-dare-you texts to far chummier and intimate exchanges in such a short period of time. It was clear who the texter was from the get-go, and for someone who's rather smart, Delaney was a wee bit slow on the uptake. Maverick proved to be far from who I was expecting him to be, and that made him an even more endearing main character than I could have hoped for. I liked the romance and the hint of intrigue that threatened Maverick's future. I'm also curious to see what'll happen next between two people who are close to Delaney and how their relationship will be moving forward. My fingers are crossed that their book will be the second one to be released! I Dare You receives 4.5 stars. ♥

Purchase I Dare You on Amazon.