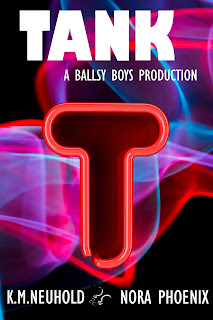 Note: This ARC was provided by the authors via Vibrant Promotions in exchange for an honest review.

I admit it: I wasn't a fan of the first novel of the Ballsy Boys full-length novel, Rebel. So, going into this second full-length novel, Tank, there was a wee bit of apprehension on my part but it intermingled with a fair amount of hope. After reading Tank and Brewer's story, I'm glad that I decided to push through with the series even though it didn't get off to the greatest of starts, and I'm thrilled that it bounced back even better than I could have imagined. K.M. Neuhold and Nora Phoenix kicked things up a notch and tightened up their storytelling with a focus on both story and character development that I appreciated and want to commend them both for.

Tank and Brewer both work for Ballsy Boys, but they've never actually worked on a scene together...until now. It's about to become one of the most awaited scenes to be produced, but neither guy is actually looking forward to working together. Tank can't stand Brewer and the feeling is very much mutual, but with the success and popularity of their first scene comes a high demand for more. They have preconceived notions of one another, but the more time they spend together, the more they realize that there's more to one another than meets the eye. In a relationship where first came hate then came sex, can love flourish and win out in the end?

From the opening chapter to the closing lines of this novel, there was simply no looking away from these two guys who thoroughly disliked one another and then were forced in each other's space (literally and figuratively!). This was an enemies-to-lovers story that had sex and romance plus humor and angst. Tank and Brewer were at the forefront, but I loved getting to know Peter and Micah even more (FYI, those are their real names). The addition of Shaggy gets bonus points from the dog lover in me, and the snippets we get of the remaining Ballsy Boys now has me excited for more. Tank has set the bar high and it easily receives five stars. ♥

Read my reviews for the Ballsy Boys series: