Review: About Time by B. Cranford (The Avenue #1) 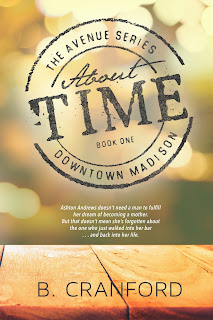 About Time is the first in author B. Cranford's new The Avenue series, the title of the series based on the name of the bar owned by two of the Andrews siblings. Thirty-four-year-old Ashton Andrews is the middle sibling and the only girl being two years younger than her eldest brother Aaron and two years older than their youngest brother Austin. After wasting ten years with a man she thought was "the one"--a sentiment those closest to her beg to differ--Ashton refuses to waste any more time on going after what she wants, and what she wants most is to have a baby. She has the support of her brothers plus that of her new brother-in-law Simon and her friend and employee Odette, but Ashton has always been fiercely independent and determined to do this on her own.

And then Andrew Duncan returns to the Madison. The guy Ashton only knew by his last name and his silly nickname of Dunk is back, and she wonders if he's thought of her as much as she's thought of him over the years. It's been a decade and a half, but that one week and one kiss they shared was a milestone for her. What if she'd never returned to her family home after that kiss? What if she they had the chance to pursue their attraction for one another when she was nineteen and he was twenty-one? Andrew has remained Aaron's best friend, but he's also remained the one that got away. Could this be their opportunity to see if there's a future for them as a couple? Maybe they've always been meant to be or maybe not, but it's about time they find out.

I've enjoyed B. Cranford's first two novels, and I was looking forward to reading this new release of hers when I heard about it. This was sort of a second chance love story in that Ash and Andrew may have had that one week together but it wasn't until they saw each other again fifteen years later that they were finally able to be together. I liked their love story, although I admit that the dream sequences were a wee bit weird. Another thing I enjoyed and wanted more of was Ash's interactions with her brothers. So yes, there's a family angle in the book, and I've always been a sucker for that sort of thing when I'm reading a book that's part of a series that features members of the same family, so I was hoping there'd been more, but some is better than nothing.

I know that the next book will feature Aussie and Odie (aka Austin and Odette--side note: it's cute that Austin's real name is after a city and his nickname is after the nickname for Australians), but I hope we get Aaron and Simon's story as well, especially since it was what happened to Aaron after he came out that led to the implosion of the Andrews family and Ashton and Andrew meeting. Aaron and Simon are already married here, and that just make me even more curious as to how they met and what they had to go through, especially given that they were just starting out as a couple when Aaron was disowned by his parents. So, fingers crossed we'll get a book about them after Aussie and Odie's. As for Andrew and Ashton's, I'm giving About Time four stars. ♥

Learn more about B. Cranford.

Purchase About Time on Amazon.