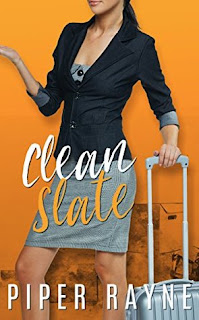 Clean Slate is the free prequel novella that bridges Piper Rayne's Dirty Truth series and their brand-new Charity Case series. Victoria Clarke was introduced as Jagger Kale's assistant in Chore Play, the third and final Dirty Truth novel, and the new series kicks off with her story. After her mother is diagnosed with multiple sclerosis she makes the only decision that she can: move from Los Angeles to Chicago. Doing so will require her to not only quit her job and do so while her boss is in a good mood--or in as much of a good mood as Jagger can muster--but also for her to speak to her ex-husband and inform him of he move, knowing that it will mean their seven-year-old daughter will be more than a thousand and a half miles away. Both will be difficult to do, but Victoria needs her slate clean.

This was a nice peek into the three women whose stories will be told in the new series. Of course Victoria gets primary focus because her story is what starts the ball rolling, but even with the mention of her ex-husband here, I know he isn't the one she ends up getting paired with in Manic Monday, thanks to having read the blurb for it. The two other women, Hannah Crowley and Chelsea Walsh, had brief appearances, although Hannah should be familiar to those who read the The Manny, the first full-length Dirty Truth novel. While Clean Slate didn't give a whole lot of information, it did give enough to pique my curiosity, which is what prequels are meant for. Four stars. ♥