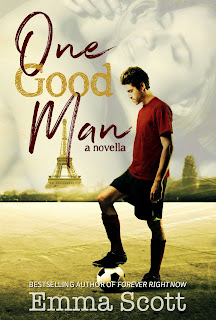 I originally read One Good Man when it was released as part of the multi-authored sports romance anthology, Team Player. This was also my first ever Emma Scott read, even though I already had three earlier titles waiting patiently for me on my tablet. Set in 1970, the novella is about a college student and aspiring journalist named Janelle Martin who finds herself in Paris. She hopes this'll be her opportunity to work on a story that'll have substance while also providing her with the much needed experience she so needed. When she's assigned to write an article on a medical school student and highly talented semi-pro football player named Adrian Rousseau, she thinks it's nothing more than a fluff piece and goes into it without much enthusiasm. However, there's more to Adrian than meets the eye; Janey finds a tale worth telling and loses her heart in the process.

Janey wasn't a favorite of mine for the first few chapters in the book. I think she had pegged Adrian to be nothing more than some mindless jock who used his being an athlete to hook up with women. Thankfully, she managed to win me over because Adrian was such a great main character who deserved to have someone who was at par with his multi-layered personality. There's a lot of depth to the story as well, with Janey developing into a woman who saw beyond what was presented to her. She believed herself to be someone who delved deeper into a subject, but she was really just wading around, keeping her head above water until she met Adrian. This story is the the kind that's truly worthy of a re-read, and I'm glad that I was able to experience Adrian and Janey's beautiful romance one more time. One Good Man is one very recommended read. Five stars. ♥

Purchase One Good Man on Amazon.