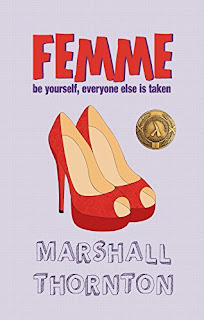 Where has this book been all my life?! Okay, maybe not all my life because that would be over four decades and Femme is less than two years old, but you get what I mean. I know understand why this novel received the recognition that it did. Marshall Thornton, whose Pinx Video Mysteries series introduced me to his writing, has penned a gay romance that made me laugh while also giving me something to ponder on as well. This is the first in the author's series by the same title, and I happily read both novels back-to-back in a single afternoon.

When Lionel and Dog wake up next to each other, it takes a beat or ten for them to figure out how they ended up in bed together. After all, they seem to be unlikely bedmates, even if it is for a mere hookup. Twenty-three-year-old Lionel Gilman is proudly femme and works as a cocktail server at The Bird, which is the bar that sponsors the Birdmen, the recreational gay softball team that the masculine twenty-eight-year-old cardiac stress test administrator Doug Benson--Dog--is part of. One time doesn't seem to be enough for either one of them.

This may sound weird, but I liked that these two guys struggled to find some sort of footing together. Dog is very much attracted to Lionel, although he doesn't fully understand why for a good portion of the story. He's uncomfortable with Lionel's more flamboyant and feminine appearance and personality, although this is muted compared to the boorish and ill-informed words and actions of some of his teammates. While Lionel may be more confident in the person that he is, he also doesn't fully appreciate how it is to be in Dog's "butch" shoes.

There were quite a few hilarious moments in the book, especially between Lionel and Carlos, aka Lynette and Carlotta. Like I mentioned earlier, however, there were parts in the book that gave me pause, particularly when it came to the way gay men saw one another. Being femme was seen as a no-no by some, with them insisting that Lionel "tone" it down; but then you also had those who couldn't understand how a guy as masculine as Dog could be gay. Not only did Femme entertain me, but this rom-com was thoughtful and heartfelt. Five-plus stars. ♥