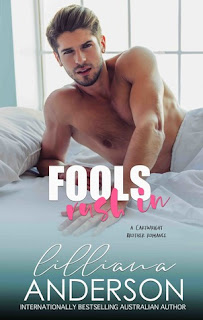 I've been looking forward to reading Fools Rush In ever since I fell in love with the offbeat crime family that was the Cartwrights in Fool Me Twice, the first in Lilliana Anderson's Cartwright Brothers series. Well, okay, maybe not the entire Cartwright family because I certainly wasn't a fan of the matriarch, Jasmine. Also, when I call them a "crime" family, I'm not talking about the mafia or something totally nefarious. The Cartwrights are thieves and they're damn good at what they do. In the first book, we get the love story between Nate Cartwright and Holland Williams, but while we do get learn a thing or two about what the family does and some of dynamic that goes on among the five brothers and their mother, it's limited at best because of Jasmine's icy reception to Holland, plus Holland's refusal to have as little to do with her in particular and the family in general. This second book, however, allows us to have a better idea about how the family is and we see the forced marriage situation from a wholly different and more accepting perspective: that of Holland's best friend Alesha Ward who marries Sam Cartwright.

At thirty-two, Alesha Ward had pretty much accepted that maybe marriage wasn't in the cards for her or her best friend. Then, in the strangest twist of fate, Alesha does get married to thirty-five-year-old Samuel Cartwright, younger brother of her own best friend's equally new husband. There wasn't much choice in the matter other than which brother she would marry. She did what she had to in order to make sure that no harm would come to her, but she never expected to actually find herself falling for Sam. He's gorgeous, sweet, sexy, and he happens to be a thief. He makes no apologies for the life he and his family leads, but he also insists that no harm will come to his wife. She's a Cartwright now, and they're loyal to one another. Could this mean that she's finally found a place to call home and people to call family? But why is it that her own friendship with the one person she was closest to feel like it's deteriorating? And what of her father and brother? Would they be able to accept the fact that Alesha had gotten married without their blessing? It's time for her to choose between life as she knew it or the unknown.

After the way Alesha was towards Holland in the first book, I was very much curious to learn the hows and whys as to her acquiescence to her being married to Sam and her somewhat cool treatment of Holland. For a good portion of this second Cartwright Brothers novel, I struggled to both like and understand Alesha. It was as if she had latched on to Sam and the rest of the Cartwrights and because of the strain between Nate and Holland and the Cartwright matriarch, Alesha saw them as causing unnecessary rifts within the family. To be fair, I went into this knowing only Holland's side of the story, but even after reading Alesha's, there was a part of that felt that Alesha was just as quick to turn her back on Holland, thinking her the petulant, bratty villain. However, while it did take me a good, long while to like her, Alesha did manage to win me over. I liked being able to have a better understanding of the family as a whole as well as one pivotal moment that happened in book one. I loved getting more than one perspective on everything that happened and am excited for book three! 4.5 stars for Fools Rush In. ♥

Read my reviews for the Cartwright Brothers series:

Fool Me Twice (book one) - five-plus stars - My Review