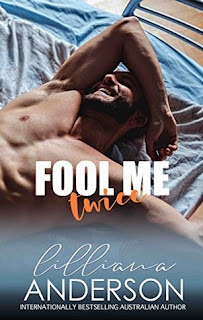 There was a lot I didn’t know, and probably a hell of a lot I didn’t want to know. Could love teach me to turn a blind eye and accept what he was? Or would his profession—his other life—become a cancer that slowly ate away at our relationship?

This book was not quite what I expected it to be. I came into Fool Me Twice, the first novel in the brand-new Cartwright Brothers series penned by bestselling author Lilliana Anderson, ready for a romantic comedy. Oh, there were certainly lighthearted and laughter-inducing moments, but this book was much more than your run-of-the-mill rom-com. I lost count of the number of times I was torn between wanting to slap the male main character upside the head while also wanting to snuggle up to him. Same was the case with me wanting to shake the female main character so she would see some sense while also totally getting why she was the way she was with her guy. Le sigh. I should have known to expect the unexpected given that this is a Lilliana Anderson-penned book and based on my experience with three of her other titles, all of which I totally adored.

Thirty-two-year-old Holland Williams has a pretty good life. She's got a best friend she can always count on, an aunt who's protective of her, and a job as a teacher that she loves. Sure, she doesn't have a man to call her own, but that's okay. And then she meets a guy named Ben and he rocks her world in more ways than one. They share one hot night together, and while finding him missing the following morning was one thing, finding all her belongings was another thing altogether. After a bit of very amateur reconnaissance, Holland learns "Ben" is actually thirty-six-year-old Nathaniel Cartwright, one of five brothers who, along with their alpha mother, are involved in illegal doings. So it would be totally wrong of Holland to sleep with Nate AGAIN (yay!) only to have him steal her stuff AGAIN (boo!). Just like it would absolutely wrong for her to MARRY him. Right?

Fool Me Twice had the most unique story line I had ever come across so far this year, and it made for one hell of an entertaining read. I loved that Holland was as kickass as she was, finding courage even when caught in a situation that she felt as if all choice had been taken from her. On the other hand, Nate is one of those heroes that I wasn't all that sure what to do with. Smack him across the cheek or give him a smack on the lips? Choices, choices. But there was so much more to them and to their story than a good girl who walks the straight and narrow falling for the bad boy who could find the a shortcut anywhere, anyhow. This book had angst, albeit in small doses, and while there is resolution as far as Holland and Nate's story is concerned (I so did not see that ending coming!), I've got questions about at least three peripheral characters. Five-plus stars! ♥