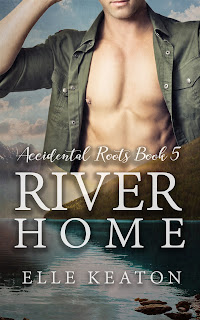 I love how this series just gets better and better with each new novel that Elle Keaton releases! Accidental Roots fifth and latest addition is River Home, which is the story of thirty-year-old federal agent Nathaniel Richardson and twenty-eight-year-old mechanic Miguel Ramirez. Both men have moved to Skagit, Washington for a much needed change, with Miguel having lived in the small town for three years and Nate being a newer transplant. One came to start over, the other to find a place to consider home, but in the process, they find one another.

Miguel came to Skagit running from his past, but for three years, his life has been quiet and one that's allowed him to even consider that he's managed to outrun what he's left behind. Starting something with Nate may seem odd, especially given that Miguel has just decided he's done with men and Nate has never been all that comfortable nor fulfilled being intimate with anyone. Just when things seem to be going smoothly, strange things are afoot, and by the time those in Skagit realize what's going on, it may be too late for Miguel and Nate.

Goodness, but how I enjoyed this book! Both Miguel and Nate were highly interesting characters--Miguel with his mysterious past and Nate with how he's never been truly emotionally intimate with anyone. They both have rather unhappy childhoods to speak of, and it's somehow shaped them into the men they are now. There are curious twists to Nate's back story, one I thought was going in a particular direction--it's the conspiracy theorist in me--then I was left surprised when I saw that the author had pulled a fast one over me. Damn, but I liked it!

I liked the mystery element to this series, and it's one that's been wonderfully consistent all throughout. It balances things out quite nicely with the romance aspect, which is thankfully not overly flowery nor sentimental, as was proven with how Nate chose to deal with the revelation thrown his way regarding his family. I'm hopeful that the series will continue on, especially since there were at least three other notable supporting characters in this book alone. So, my fingers are crossed while happily giving River Home five stars. ♥

Read my reviews for the Accidental Roots series: