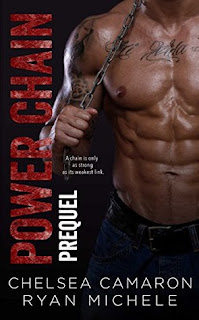 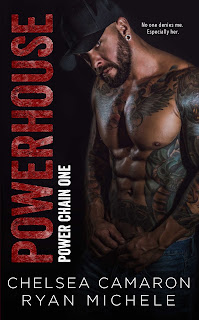 Note: The full-length novel is an ARC provided by the authors in exchange for an honest review. The prequel novella is a personally owned copy.

Chelsea Camaron and Ryan Michele are back to their hot romance-writing ways with a brand-new series entitled Power Chain. The authors push beyond their usual boundaries, going darker and more daring with the stories of four boys who meet in an Amish orphanage and find brotherhood with one another and are set on a path that binds them together. The prequel, which shares the same name as the series, is a novella which introduces readers to the four main characters--Onyx Blake, Paxton Williams, Dane Anderson, and Garrett Monroe--each of whom will get their stories told in full-length novels, PowerHouse, Power Player, Powerless, and Overpowered, respectively. The prequel also serves as a foundation of sorts, letting readers know what kind of lives these four orphans had to endure before finally breaking free, but the focus was mainly on Onyx since the first book is about him. Four stars.

PowerHouse has Onyx Blake and Torryn MacAllister as the main couple. Onyx is a man who gets what he wants when he wants. He's not someone to be pushed aside and dismissed--which is exactly what Torryn does. He makes her collateral damage in a deal involving Torryn's older sister and brother-in-law. He takes possession of her, making her a prisoner in a place called The Manor, a place that looks like a castle but was more of a gilded cage meant to keep Torryn in. Onyx never pretends to be anything other than what he was: a man who didn't get pushed around and always--ALWAYS--came out on top. He and his three closest friends are feared and there's good reason for that fear. But Torryn challenges him, refusing to be treated like a dog expected to follow commands. Onyx is prepared to break Torryn's will, but as they spend time together, could it result in him breaking her heart?

There have been quite a number of dark romance novels that have an antihero at the forefront. There are authors who actually specialize in the sub-genre, creating a niche and a strong fan following for themselves in the process. Camaron and Michele have written gritty stories in the past, but I don't think I've ever come across a main male character quite like Onyx in any of their books. The man makes no apologies for who he is, and he's very upfront about it all. However, just like in the case of a lot of other antiheroes like him, there are primary motivations to every single one of the decisions he makes. He isn't necessarily looking for redemption, but he isn't actually villainous. Now, Torryn was that right woman to knock him off his feet. She had a backbone and knew love thanks to her family. She gave the man back his soul, and he in turn gave her his heart. Le sigh. 4.5 stars for PowerHouse. ♥