Review: Approaching the Bench by Chantal Fernando (Conflict of Interest #3) 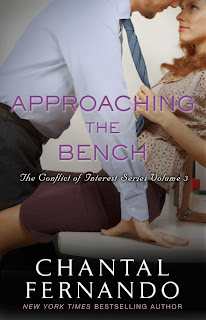 Note: This ARC was provided by Gallery, Threshold, Pocket (Pocket Star) in exchange for an honest review.

Approaching the Bench is the third and latest book in the Conflict of Interest series penned by bestselling author Chantal Fernando. This, like the first book, is novella in length and makes for a quick but entertaining read. Here, Fernando pairs up a thirty-one-year-old judge named Trinity Williams and her twenty-five-year-old brand-spanking-new law clerk Callum Hopkins. Trinity has created quite a reputation for herself, becoming the youngest judge in her state's history and a female one at that meant she had to constantly be on her toes proving her worth. She refused to be noted for nothing more than her age and her gender. This is why she's as stern and straight-laced as she is, not forming any sort of friendships with those who work around her. Distance is a good thing...except Callum is persistent and all sunshiny. He tempts her to smile and let go, but he also happens to be six years younger than him and works under her, although if she asked him, Callum would inform he'd rather she be under him. When someone in Trinity's past wants her dead, their lives are put in danger and in extremely close quarters.

I've been enjoying this series so far, it being my first from the author (though I do have her Wind Dragons MC series on my to-be-read list!). Fernando has given different pairings for each book, and having a female judge and a male law clerk and with the whole older woman-younger man angle definitely more than tickled my fancy. This wasn't the usual illicit shenanigans in Trinity's chambers. Trinity's past comes back to haunts her and it's when someone comes after her and Callum is there to prevent her from getting kidnapped that broke down most of her walls. I liked that Callum put in a true effort to get Trinity to put away the cold and unemotional mask that she dons, and it wasn't merely because he wanted to sleep with her. The person who was after Trinity was easy to figure out mainly because there's only really one person you can consider a suspect, but it was interesting to see how that whole thing would get resolved PLUS there's a bit of a twist thrown in. For a quickie read, we get a substantial enough of a tale to keep readers kinda satisfied. Four stars for Approaching the Bench. On to book four! ♥