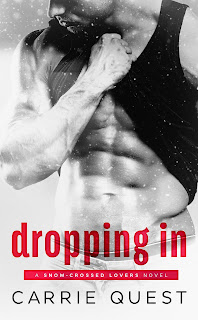 Dropping In is the second release but first full-length novel in Carrie Quest's Snow-Crossed Lovers series. We've got another snowboarder in the form of Olympic contender Benjamin Easton. He's got his sights set on winning gold, and he's worked hard to get to the point where he can feel that medal around his neck. But then his best friend has a horrific accident during practice, and Ben makes the choice to put everything in his life on hold. A gold medal doesn't matter as much as being there for your best friend--the same best friend you watched crash in the halfpipe. He needs to be there for Adam and his sole focus is helping him in any way possible. What he doesn't need is a distraction in the form of Natalie Berensen, Ben's younger sister's best friend and his complete opposite. Nat's constantly being accused by her parents of lacking focus and she can't help but feel like they see her as nothing more than a disappointment. She wants to prove herself worthy, but becoming an adult and acting like one aren't the same thing. With Ben's and Nat's lives both in flux, how they deal with love suddenly dropping in?

I love sports, and with the Winter Olympics in full swing, I'm totally in Winter Olympics mode, so this book totally fit in with my mood. The author did a nice job setting the right mood for the story as a whole, making it easier for me to visualize the scenery that surrounded Ben and Nat. It took a good, long while for to feel any sort of warmth towards Nat, given that she came off as seriously immature and misguided, prolonging her lack of desire to take on any sort of responsibility for as long as she could. Ben, on the other hand, was a main character that was complex yet highly likable. He was loyal, dedicated, loving, and had a good head on his shoulders. I liked their chemistry and enjoyed the romance, but I may have liked their individual stories even more. They were both at their respective crossroads in their lives, and they were forced to make changes and look at things from a different perspective, which was probably what was needed in order for them to truly move forward. Both the prequel novella and this full-length novel, Dropping In, hit the right points with me, and I can't wait to read Adam's story next. Four stars. ♥