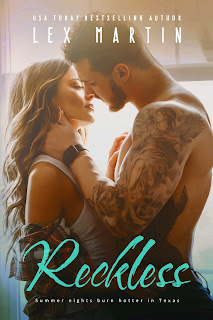 Reckless is a brand-new standalone novel written by Lex Martin, but it does contain supporting characters that were mentioned in her other standalone, Shameless--which was a spin-off of her Dearest series--making this a companion novel. This story is about twenty-three-year-old Victoria Duran, younger sister to Katherine "Kat" Duran in Shameless, and twenty-eight-year-old Ethan Carter. Tori once believed she had found "the one" only to realize too late that she was not only being cheated on but that she was actually the other woman in the whole sordid affair. No longer willing to entrust her heart to anyone, she's trying to be the good girl her older sister has always been, not the party girl who only knew how to have a good time without taking the time for responsibility. Maybe taking on the job as a nanny to two young kids will help her on her quest. However, their father proves to be quite a distraction. Ethan may be a hot single dad and rancher, but Tori knows better this time around. She has no plans of recklessly offering up her heart to a man like Ethan, risking heartbreak. Right?

This book is my third read from Lex Martin, and while her co-written effort proved to be a mixed bag of sorts, I did love this companion novel of hers. I've read single dad romances before, so hoping for something new is often nothing more than a pipe dream. This is why the quality of writing and storytelling is such a big deal with me, and thankfully, Martin's is at a high level. She's given readers two flawed main characters who may have been wary about one another in the beginning, but whose love story beautifully and heartrendingly evolves as the book progresses forward. Tori is a strong young woman who's still somewhat reeling from her failed relationship, so falling for someone like Ethan (and you'll get why I'm wording that phrase that way when you read the book) had my poor heart cringing because I feared this time around, it would truly break her if everything fell apart. With Martin's fantastic writing and a story that held my attention and my heart from start to finish, there's no doubt in my mind that Reckless is one of my favorite reading choices for 2018. Five stars! ♥