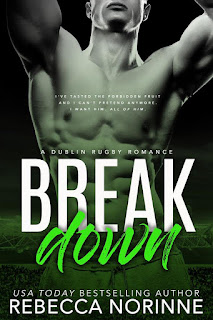 Okay, let me confess something straightaway: I'm often wary when it comes to reading an author's first foray into M/M romance. I'm specifically talking about authors whose M/F love stories I've read and enjoyed in the past. Maybe it's weird, but I desperately want them to do well but I'm also anxious because I make no secret over the fact that M/M is my favorite romance sub-genre. Here's the thing: when I signed up to read and review Rebecca Norinne's fourth Dublin Rugby book, I did so WITHOUT knowing what it was going to be about. Yep, I went into the sign-up blind, as I did when I proverbially cracked open the ebook and then there it was. Hello there, M/M story line! Gah! I had a bit of a flutter when I realized it was M/M, but yeah, there was the anxiety as well. So, how did the author fare with her first published M/M romance? Well...rather well, if I do say so myself!

At thirty-two, Liam Donnelly knows all too well the toll years of playing professional rugby can take on one's body. He's older and has had injuries, and on the heels of a blackmail attempt from the first man he had ever hooked up with, he's left with no other option but to make the move from Dublin to Edinburgh. This is a new start for Liam, and for as long as he keeps his attraction to men at bay and focus on helping his new team win, all should be good. But then Liam wasn't counting on the mad chemistry he has with thirty-two-year-old noted chef Lachlan MacLeod. The Scot has the Irish rugby player all tied up in knots, but maybe if they keep the romance developing between them on the down-low, Liam will be able to keep any and all unwanted rumors and possible speculation of his sexuality at bay. But Lachlan's out and proud and hiding out with Liam in his closet is not what this seasoned chef wants...no matter how much he loves his rough and tumble rugby player.

The story has a familiar tone to it: closeted athlete falling for an out gay man and the two of them dealing with a secret relationship that could supposedly hamper said athlete's career. So, in terms of a wholly original story, that isn't what's here in this fourth Dublin Rugby book. However, what the author has done is written HER story quite well and she gives readers the perspectives of both main characters, making it possible to better understand their motivations, fears, and hopes. It would be easy to say that Liam should simply come out, especially given that openly gay athletes are no longer merely accepted but are wholly embraced by countless members of the public. But this was a decision that Liam had to make, and it was often heartbreaking to see Lachlan try to be patient and supportive while also wishing his boyfriend could announce to the world that they were a couple. I felt as if I was part of their journey, but then that's what this series has consistently made feel. That ending, though, has a two-worded note from Norinne that has me wondering if there's more to come from L&L (that's what I'm calling them now). My favorite book in the Dublin Rugby series, Break Down gets five stars. ♥

Read my reviews for the Dublin Rugby series: