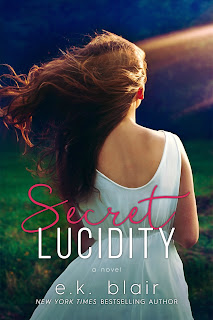 My first foray into E.K. Blair's writing wasn't what I had hoped it would be, especially given that I had blindly bought her first two box sets--Fading and Black Lotus--basing my decision on both the fact that they were on sale (hey, three books at less than a dollar per box set felt like a good deal) and the good reviews on Goodreads. I wasn't a fan of the author's Crave duet, and I've yet to read either of the box sets, but I did decide to dive in to Blair's latest standalone, which touted a forbidden romance. I kept my expectations reasonable and I hoped that, at the very least, Secret Lucidity would be a good read. And guess what? I got more and was left rather impressed.

This novel may have a seventeen-year-old as its female main character, but be warned: there is nothing young adult (YA) about the story. The end of  Camellia Hale's junior year meant summer break and a lot of excitement for the school year to come. She, her boyfriend, and her friends were on their way to becoming seniors. But then all it takes is for one split-second for everything to change--for dreams to turn into nightmares and for the light to become dark. Cam loses the person that means the most to her. She changes and everyone around her doesn't know how to deal with this new version of her. She's lost and alone and then turns to one person--her swim coach.

Cam and her coach, David Andrews, have a fourteen-year age gap between them, and the fact that she's legally a minor is going to be an obvious complication to their burgeoning romance. I won't get into the nitty-gritty of the plot and what happens to this taboo relationship. What I will say is that the book is quite well-written and Blair adds in her own layers to make what could have been another simple, run-of-the-mill teacher-student slash May-December love story a far more complex one peppered with a whole lot of angst. This isn't a sweet and sappy romance. There are numerous potholes which they'll have to maneuver their way around along their bumpy ride.

Let's be honest here: she's seventeen, he's thirty-one. They both knew entering into any sort of non-platonic relationship that there would be consequences. Matters of the heart don't always equate to understanding and acceptance, especially when this sort of thing isn't exactly condoned by more than just the law. Funnily, the thing I liked most about this book was the final chapter and the epilogue. The former felt real and honest, and I'm glad that the author didn't take the easy way out with this one; the latter wrapped their story up in the happily-ever-after that, after everything they went through, Cam and David deserved. Secret Lucidity deservedly gets 4.5 stars. ♥