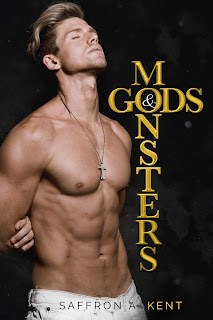 Sigh. I've been sitting here for what feels like hours trying to figure out a way to put into words what I thought and how I felt about this book. Gods & Monsters was considered one of the most anticipated releases for the month of February, and I've read Saffron A. Kent's two previous releases, so I know what she's capable of writing-wise. So, adding this title to my to-be-read list was a no-brainer and finally being able to read it was something I was excited about. So I jumped in, dove deep, and allowed Kent's story of two star-crossed lovers cascade over me. But then, at some point, I found myself floundering, and then when it got to the point that I was drowning in more negative thoughts and emotions than positive ones, I stepped away. I waded back in--I hate not finishing a book I've already started--but by then, the sole life preserver I hung on to was the one that had to do with the author's good writing.

Gods & Monsters is the story of Evie Hart and Abel Adams. As a twelve-year-old and fourteen-year-old, respectively, the two formed a kinship that always felt more--that always seemed to be meant for far more. She's warned away from him, but Abel makes Evie feel as if she's the most extraordinary creation that's ever graced the face of the earth. The heart wants what it wants, and and over the next few years, the two have clandestine meetings, becoming even closer, almost as if they couldn't tell where one began and the other ended. Being with Abel is no longer a choice for Evie--it's a given, because she's belonged to him from the moment their paths intersected, heart, body, mind, and soul. But the challenges to Abel and Evie's love story are the kind that could make even the strongest buckle. Who are the gods and who are the monsters? Could it be one or both...of them?

Here's the thing. If it's merely a matter of the strength and quality of writing, Saffron A. Kent has it down pat. She's had it from her debut release, maintained it in her sophomore effort, and it's obviously still there this third time around. And I'm all for love stories that have main characters persevering and true love winning out, but this is just one of those times where the love I wanted to endure and overcome was the love that Evie had for herself. I get it--they're each other's first loves. They've shared things with one another they've never shared with anyone else. And yes, redemption is just one of those things that darker romances like this one demand, but whether we want to admit it or not, Abel was controlling. The pit in my stomach just grew bigger, to the point that I knew Gods & Monsters would not win me over by the end. I'd still read a Kent-penned novel, but I have to give this one 2.5 stars. ♥