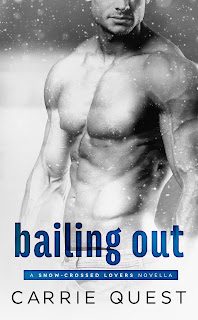 Bailing Out is the free prequel novella that starts off the Snow-Crossed Lovers series penned by Carrie Quest. This second chance romance is about twenty-five-year-old Gabriel Power and twenty-four-year-old Isabelle Garland, the bad boy of snowboarding and the good girl of figure skating, respectively. Gabe and Belle shared something special four years ago, but everything was thrown to the wayside when a potential disaster could have messed with both their careers. Now in Sochi, Gabe's dreams of winning gold and then walking away from snowboarding--and his tyrannical father--are withing reach while Belle's dreams died after the accident that crushed her leg. When they find themselves stuck in a locked storage room at the hotel they're both staying at, it feels like an opportunity four years in the making. The two could choose to finally clear the air or bail out on a second chance.

This was a pretty good read. Both Gabe and Belle have issues with certain family members who think they know better. While what happened to them four years prior was heartbreaking, especially given that they were kinda young, I think the most important point that the story made was that the time apart allowed them to do some more growing up. Standing strong on their own two feet was something they had to learn on their own and maybe being in Sochi was that shot at winning something more than a medal. The author's writing was pretty fast-paced and I did enjoy the story as a whole and even felt that there was character development thanks to the flashbacks. Bailing Out is a quickie read and is currently available for free on major e-retailers. This prequel receives four stars. ♥