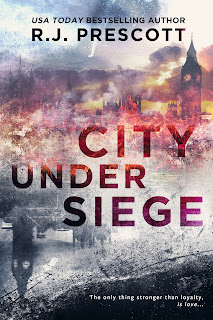 “I'm an officer in Her Majesty's Armed Forces and an elite SAS operative. I will defend my country and my family, and you can be sure as fuck that I'm going to defend my girl's right to live free and happy.”


Bestselling author R.J. Prescott's latest release is nothing like her previous novels--The Hurricane, The Aftermath, and The Storm--and yet City Under Siege has an air of familiarity to it. It has the same grit and intensity that the three other books did, and at the very heart of everything else that swirls around the main characters is a love story that stays with you. If you've read Prescott's work before, you know what I'm talking about. If you haven't gotten around to perusing her work, I highly suggest that you do so, and City Under Siege is an ideal place to start.

When Sarah Tatem loses both her father and brother to the same accident, she's forced to leave the life she loved behind in order to try and fill the gap left behind by the men who meant most to her. Once there, she soon realizes that Tatem Shipping is involved in illegal dealings with a dangerous Russian man named Vasili Agheenco. She does what she believes is the right thing: she contacts a counter-terrorism hotline and finds herself working with the Ministry of Defence and then quickly placed under the protection of the SAS's Lieutenant Thomas Harper's team.

Tom Harper has always been focused on the mission at hand, but when he meets Sarah Tatem, he knows she's a game changer. Keeping a close eye on her while trying to find a way to bring down Agheenco and his group is one thing, but he wants to get far closer, even though he knows it would be against protocol. The more time they spend together, the more he refuses to let her go...but he knows the time will come that he'll have no choice but to do so. Everything around them falls apart faster than they anticipated. Can Tom do his duty while saving Sarah?

From the pulse-pounding tension didn't just come from the threat to Sarah's life but also from the clear-cut love and desire between her and Tom. These two had such a fervor to them that there was simply no turning away from them or the story they were telling. Tom is protective but in no way domineering, always respectful of Sarah while also allowing himself to be more vulnerable with her. And Sarah? The woman had a spine of steel and a heart of gold, always putting others first. They were exactly what the other needed through good and bad circumstances.

There are books that have peripheral characters that tend to distract, but that wasn't the case with this one, although quite a few of those along with some in a more supporting role proved to be rather memorable. The full cast of characters alongside a fantastically written story that gave us much of the romance as it did the suspense, made City Under Siege one of the best reads that I've had the privilege of reading so far this year. R.J. Prescott has yet to disappoint me, and I can't wait to witness what she has up next for all her fans and readers. Five-plus stars. ♥