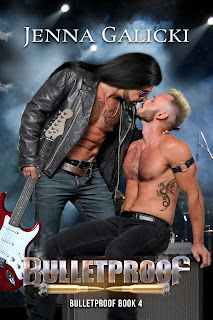 Bulletproof is the fourth--and what I'm guessing is the final--novel in the series by the same name from Jenna Galicki. Derek MacAlister's the last single member of the megastar heavy metal band, but he isn't exactly looking to get rid of that status anytime soon. He likes the partying and carousing, but with his best friends and band mates preferring to spend their time with their significant others at home. But then he meets Travis Fontana, lead singer of Reckless, the band that's accompanying Bulletproof while on tour, and in Travis Derek's found someone who seems as ready to bring the house down as much as Derek, whether while in a concert venue or not. However, there's a darkness that's right below the surface of the ever-present grin on Travis's face. He's damaged goods and he's barely dealing with the demons that continue to have him ensnared in their claws. When the pressure of newly found fame and his past get too much for Travis to bear, Derek will need to finally grow up and think of something more than a quick fix. Can Derek be strong enough to help Travis heal?

This story is, by far, the most heartrending among the four in the rock star romance series. Derek did a hell of a lot of maturing in this book, and maybe it was a combination of it finally being time and his having Travis in his life. After the third novel, it was obvious that the next book was going to be Derek's, and I wondered who the author could come up with that would tame the raunchy and rollicking Bulletproof guitarist. Travis definitely was a surprise, but it made sense later on. I felt for him, especially when his past came to light. He struggled and Derek was right there by his side, but I think the most important thing that the story highlights is that Travis had to make to conscious choice to ask for help and to want to heal himself. With this being the last book, it was nice to also catch up with the other characters that we already got to meet in the previous books. Overall, the series has been a pretty enjoyable experience, and it did end on a high note with Derek and Travis's story. The books--well, at least the last two--were a case of not judging a book by its cover. Four stars. ♥

Read my reviews for the Bulletproof series: