Review: The Wonder of You by Harper Kincaid (A Different Kind of Wonderland #1) 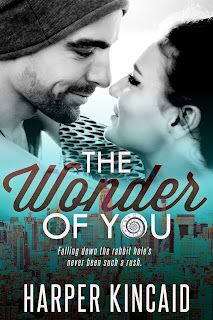 The Wonder of You is the first book in A Different Kind of Wonderland, the new series from Harper Kincaid. We've got Alice Leighton, a sassy Southern belle who's just moved to New York to pursue her graduate degree. She gets a double dose of a rude awakening when she's faced with a rather cocksure New Yorker who was on her to move her tush and get out of the cab he needed to get in and then she realizes she left her purse in the cab. It's Dare Grangeworth--the guy she's nicknamed "City" and the same one who was a pest while she was getting out of the cab--who proves to be the one who saves the day in more ways than one. The acclaimed artist wants to pursue the beautiful woman who had no qualms telling him exactly what she thought of him, but she claims to not be interested...until she realizes that he's exactly who she needs for her research. No-strings-attached sex with a hot guy for an agreed upon period of time would mean she didn't have to put her heart at risk. She's had it broken before. But while Alice is refusing to fall down the rabbit's hole, she may not be able to stop from falling for Dare.

This romance inspired by Lewis Carroll's Alice in Wonderland was an okay read. Alice and Dare were an entertaining couple, although I did find my attention veering away from Alice and being more captivated by her sister and best friends more than once. While Alice may have had a jerk of an ex-boyfriend, Dare's past was more heartrending. I had a feeling what the revelation was going to be, but the gap between the first time the name of his ex is mysteriously mentioned by one of Alice's best friends to the revelation of what happened was too long, and by the time it was finally out in the open, it felt anticlimactic. This book isn't my first Harper Kincaid read, and while her first series didn't fare too well with me, I had moderately high hopes that this new series would be different in terms of reading experience. Kincaid's storytelling has become more on-point to a degree, but there was just this disconnect between me and the book as a whole. This made it difficult for me to fully immerse myself in the story and with the characters, so I can only give The Wonder of You three stars but have hopes for book two. ♥

Purchase The Wonder of You on Amazon.