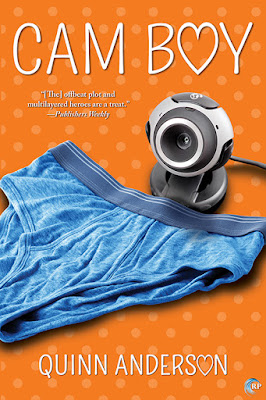 About Cam Boy
Their chemistry is undeniable, but he knows better than to mix business with pleasure.

Mike Harwood is a loud-and-proud professional adult entertainer. In the past three years, he’s starred in dozens of films, and he’s very good at what he does. But as focused as he’s been on work, he’s neglected everything else, including his love life. He’s so used to faking attraction, he can no longer tell when something real is staring him in the face.

About the Murmur Inc. series

Learn more about the Murmur Inc. series on Riptide Publishing.

A Note from Quinn Anderson
Thanks for joining me on my book tour! I’m Quinn Anderson, author of On Solid Ground and All of the Above. I’m here to share some inside information about Cam Boy, which came out on February 12th, my 28th birthday! Stay tuned to hear about the friend who inspired this novel, fun facts, and more about the characters. Leave comments on the tour posts for a chance to win a $10 Riptide Publishing gift card!

A Guest Post by Quinn Anderson
Saying Goodbye to the Murmur Inc. Series (for now)

Writing the Murmur Inc. series over the course of the past two years has been so much fun and such an incredible journey for me as a writer. When I first conceived of it, I was unemployed and watching an infomercial in the middle of the night. I’m not ashamed to admit it wasn’t a shining moment in my life. Now, three books later, I feel like I’ve created something special, and I’m proud of each book in a different way.

Cam Boy will always have a special place in my heart, however. It was the first book I wrote from alternating points of view, and as a result, I was able to connect more with the love interest, Mike. He ended up being one of my favorite characters to date. He’s so saucy and acerbic, but also caring and protective. It was also such fun watching Josh grow from the petulant brat he was in Action to a well-rounded and thoughtful character.

I may write a fourth book down the line, but if that never happens, I’ll still be totally satisfied with this series. I came here to put some fun, sexy, sex-worker-positive media into the world, and that’s what I did. Thank you for going on this journey with me! 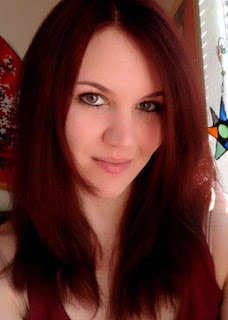 A nerd extraordinaire, she was raised on an unhealthy diet of video games, anime, pop culture, and comics from infancy. She stays true to her nerd roots in writing and in life and frequently draws inspiration from her many fandoms, which include Sherlock, Harry Potter, Supernatural, Lord of the Rings, Star Wars, Buffy, Marvel, and more. You will often find her interacting with fellow fans online and offline via conventions and tumblr, and she is happy to talk about anything from nerd life to writing tips. She has attended conventions on three separate continents and now considers herself a career geek. She advises anyone who attends pop culture events in the UK to watch out for Weeping Angels, as they are everywhere.

Her favorite television show is Avatar: the Last Airbender, her favorite film is Tangled, and her favorite book is Ella Enchanted. She can often be spotted at conventions, comic shops, and midnight book releases. If you're at an event, and you see a 6'2'' redhead wandering around with a vague look on her face, that's probably her. Her favorite authors include J.K. Rowling, Gail Carson Levine, Libba Bray, and Tamora Pierce. When she's not writing, she enjoys traveling, cooking, spending too much time on the internet, screwing the rules, finding the Master Sword, guided falling, consulting for the NYPD, guarding the galaxy, boldly going, and catching 'em all.

Giveaway
To celebrate the release of Cam Boy, one lucky winner will receive a $10 Riptide credit! Leave a comment with your contact info to enter the contest. Entries close at midnight, Eastern time, on February 17, 2017. Contest is NOT restricted to U.S. entries. Thanks for following the tour, and don’t forget to leave your contact info!