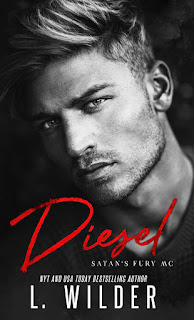 If you've read L. Wilder's Satan's Fury MC series before, specifically the seventh novel, Two Bit, then Scotty should be a familiar name, having been a prospect with the Chosen Knights motorcycle club before he and Zoe, who ends up with Seth, aka Two Bit, find themselves seeking help from Satan's Fury. Scotty, who is in his mid-twenties and earned the road name Diesel while prospecting for his new club, has quite the back story, and it finally gets told in the eight novel--though this is the ninth release from the series--which has said road name as its eponymous title.

When the Satan's Fury MC finds a bloodied and badly injured twentysomething woman at the front doorstep of their clubhouse, instinct has them taking her in. When she awakens, she has no memory of who she is or what circumstances may have led to her to suffer the way she did. Diesel becomes her constant companion, watching over her as she slept and spending time with her when she came to. Nicknamed "Lucky", they learn that her name is Ellie Blackwell, and it turns out that her story is a harrowing one that surprisingly ties her to Diesel and the club.

One of my favorite things about this book was how subtle the suspense element was. We know that Ellie's been abused, but there parts of her story only come to light only as she tries to regain her memories. Interestingly, the MC takes a backseat of sorts, truly making this Ellie's story to tell, even though the club plays a more than pivotal part in the resolution of her tale. L. Wilder notes that there'll be more stories to tell in Satan's Fury MC: Memphis Chapter, which makes me wonder if Diesel spells the end of the original one. If so, it was a five-starred end indeed! ♥