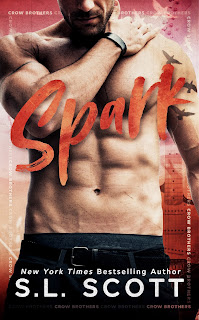 Bestselling author S.L. Scott's new series, Crow Brothers, is a spin-off of her The Resistance books, and introduces readers to three brothers and aspiring rock stars--Jet, Rivers, and Tulsa--and the women who change their lives as they seek stardom and recognition. The series starter is entitled Spark, and it's about the eldest among the brothers, twenty-six-year-old Jet, and twenty-four-year-old Hannah Nichols. They share one night together--one that neither of them forgets in the six months until Hannah shows up at a bar where the Crow Brothers performing. She then proceeds to knock Jet's world off its axis when she informs him that he has a son named Alfie. She expects nothing from him other than to sign away his parental rights, but if Hannah believed that Jet would do it without hesitation, he's gearing up to rock her world--and in more ways than one.

Let me put this out there because this is one of the ways this book set itself apart from those that share a similar story line: Alfie is not Hannah's son with Jet, but then that's easily figured out when you check out the amount of time that's passed since they last saw one another and the fact that if you check out the blurb again, it says Hannah tells him "You have a son," which is different from "You are going to have a son." Semantics, maybe, but I don't want it to appear as if I'm spoiling anything for anyone. All the pertinent information regarding Alfie's conception and parentage are explained away in the first chapter. This isn't a case of one night leading to the female main character ending up pregnant with a famous person's child. That, along with Jet quickly becoming a single father just as the Crow Brothers are about to hit it big, made this distinguishable.

You don't need to read The Resistance series in order to aptly experience and understand Spark or, I'm guessing, the Crow Brothers series as a whole. If it's one thing I know that the author does well, it's a rock star romance, and she does as good a job as you would expect with her latest one. Jet and Hannah had that necessary chemistry that makes them a couple worth getting behind. The added angle of Alfie being Jet's and Hannah's late cousin's son and how they'll somehow manage to co-parent this six-year-old boy was what I considered my favorite aspect of the book. Alfie is like the secret ingredient that helped to make this an even better read than it already was. Aside from this trio that captured my attention, I'm also looking forward to reading Rivers's and Tulsa's books soon. Overall, Spark proved to be an entertaining four-starred series starter. ♥