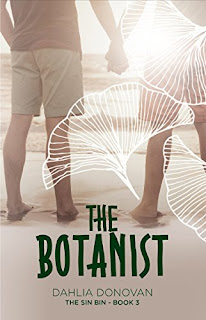 The Botanist is the third book in the Sin Bin series penned by Dahlia Donovan, although it's the first novella in the bunch. Neither of the main characters, twenty-four-year-old botany student Aled Demers and thirty-five-year-old Navy SEAL Wyatt "Earp" Hardy, are rugby players, but Aled does call Cardiff home, which is the same place as where the other SB stories in the series are set and Wyatt goes across the pond to co-start a business.

Scarred in more ways than one, Aled Demers has survived an attack while in Anguilla, but he's constantly haunted by post-traumatic stress disorder. Being back home in Cardiff doesn't help him, but if there's anyone who knows all too well the ravages of PTSD, it's recently retired SEAL Wyatt Hardy, the same SEAL who led his team in rescuing Aled. Both men will need to find the courage to face the nightmares in order to live the dream.

For a quickie read, The Botanist provided one heck of a good story. Three books in and I'm considering this novella my favorite of the lot. Wyatt was such a great main character and I liked how he wasn't an overly alpha military veteran that you tend to find in quite a few romance books. I empathized with Aled and everything he survived and was going through. These two brave men have a piece of my heart, and their story gets 4.5 stars. ♥