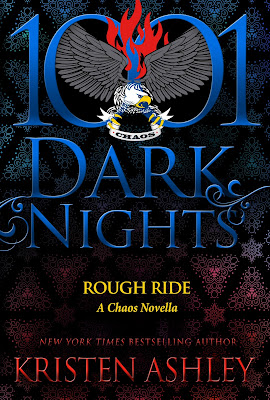 Rosalie Holloway put it all on the line for the Chaos Motorcycle Club.

Informing to Chaos on their rival club—her man’s club, Bounty—Rosalie knows the stakes. And she pays them when her man, who she was hoping to scare straight, finds out she’s betrayed him and he delivers her to his brothers to mete out their form of justice.

But really, Rosie has long been denying that, as she drifted away from her Bounty, she’s been falling in love with Everett “Snapper” Kavanagh, a Chaos brother. Snap is the biker-boy-next door with the snowy blue eyes, quiet confidence and sweet disposition who was supposed to keep her safe…and fell down on that job.

For Snapper, it’s always been Rosalie, from the first time he saw her at the Chaos Compound. He’s just been waiting for a clear shot. But he didn’t want to get it after his Rosie was left bleeding, beat down and broken by Bounty on a cement warehouse floor.

With Rosalie a casualty of an ongoing war, Snapper has to guide her to trust him, take a shot with him, build a them…

And fold his woman firmly in the family that is Chaos. 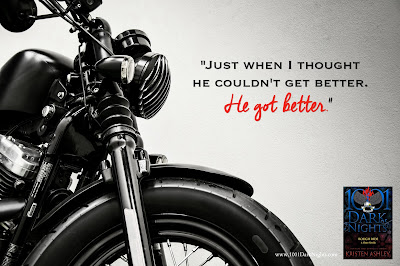 Find the Chaos series on Goodreads. 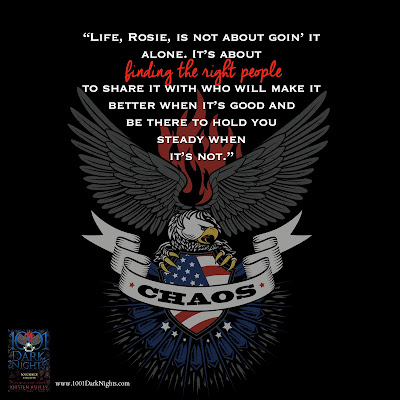 An Excerpt from Rough Ride
My dad had been a biker. He was a nomad when it came to that kind of thing (or, really, any kind of thing). He accepted being tied down by his woman and his daughter only, not anything else. Not a job. Not a mortgage. Not a membership to a club. He hung with a lot of them, including Chaos (in fact, Hammer, sadly now deceased, but one of the founding members of Chaos, had been my father’s best friend).

But he’d never hung with Bounty.

“Don’t like the feel of them,” I’d heard him mutter years ago. “If you’re an outlaw, own the outlaw. If you’re not, own that. You can’t wanna be a Gypsy Joker. You either are or you aren’t. They wanna be. But they aren’t. That shit just ain’t right and it could get dangerous.”

I should have known.

I should have followed my dad.

Mom and me had done it all our lives, job to job, house to house, city to city.

I knew why I’d stopped.

I’d wanted Shy; Shy, who reminded me of Dad.

And when I couldn’t have him, I’d gone looking.

I’d wanted what my mom had.

I’d wanted that sweetness. That love.

I’d wanted the stability that just seeped down deep into your bones from all that no matter the job changing, the scenery changing, the amount of times you boxed up a house.

Stability had nothing to do with income and locale.

Stability was all in the heart. 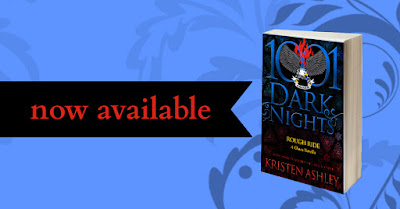 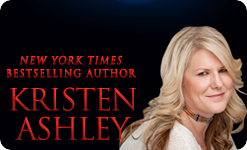 Kristen Ashley was born in Gary, Indiana, USA and nearly killed her mother and herself making it into the world, seeing as she had the umbilical cord wrapped around her neck (already attempting to accessorize and she hadn't taken her first breath!). Her mother said they took Kristen away, put her Mom back in her room, her mother looked out the window, and Gary was on fire (Dr. King had been assassinated four days before). Kristen's Mom remembered thinking it was the end of the world. Quite the dramatic beginning.

Kristen grew up in Brownsburg, Indiana and has lived in Denver, Colorado and the West Country of England. Thus, she's blessed to have friends and family around the globe. Her family was (is) loopy (to say the least) but loopy is good when you want to write. They all lived together on a very small farm in a small farm town in the heartland. She grew up with Glenn Miller, The Everly Brothers, REO Speedwagon and Whitesnake (and the wardrobes that matched).

Needless to say, growing up in a house full of music, clothes and love was a good way to grow up.