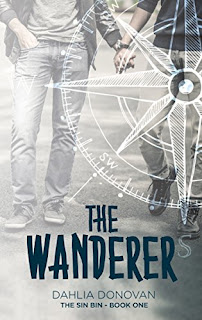 The Wanderer is the first book in Dahlia Donovan's Sin Bin series, which is a series involving retired rugby players who find love and their happily-ever-afters with men who care for and challenge them. This is the book that's considered a spin-off of the author's After the Scrum standalone. It isn't necessary to read that book, but it does introduce readers to Graham Hodson, and if you're like me, you'll end up curious as to Francis Keen and Caddock Stanford's story and add it to your to-be-read list. But yes, you can read The Wanderer straightaway.

Travel journalist Graham Hodson doesn't do relationships, which is why he went running after crossing paths with a memorable hookup. Former rugby player turned inn owner Boyce "BC" Brooks hasn't had a great deal of experience when it comes to relationships either, but there's something about Graham that's captured his attention, and BC doesn't want to let go, no matter how much Graham runs from him. When one of them receives a life-changing diagnosis, will their wandering hearts find the courage to call each other their home?

While The Wanderer does start off with a hot encounter between Graham and BC, everything slows down from that point onwards. There's a lot of back and forth, with some running and chasing, and then something pivotal shifts. For quite some time, I was hesitant to believe there was more than lust going on, but adversity brings out the best and worst in people, and you either choose to run and hide or stay and fight. Thirty-four-year-old BC and the younger Graham (who I'm guessing was in his late twenties) fought and loved. This gets four stars. ♥