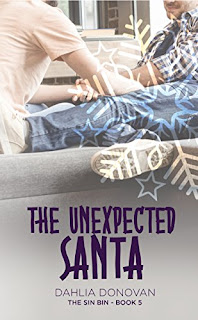 The Unexpected Santa is the fifth book in Dahlia Donovan's Sin Bin series, and it's the second novella in the collection. It also serves as a prequel to the sixth book, The Lion Tamer, setting the stage for the love story of rugby player Scott Monk and Marine Corps officer turned police chief who belonged behind a stove Gray Baird. This is a really quick read and it falls between two novels that are directly connected to this Sin Bin short story. You won't necessarily have to read the first three books, but this has a cast of characters recurring throughout.

I won't get into the story that's here because it is related to The Royal Marine. Yes, that's basically me telling you that you'll need to read that full-length novel before tackling this novella because you'll better understand why Scottie and Gray react to one another in the opening chapter of this book the way they did. Definite standouts were Alice and Alex, the autistic twins introduced in The Royal Marine. The Unexpected Santa does end in a cliffhanger of sorts, but the book that follows it is already out, so no need to fret. This gets four stars. ♥