Review: More Than Love You by Shayla Black (More Than Words #3) 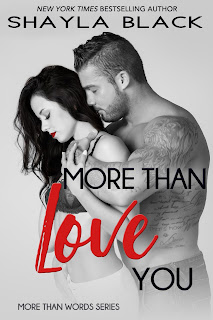 I liked More Than Want You; More Than Need You not so much. More Than Love You though? That one I loved. Shayla Black's More Than Words series has bounced back big time with its third and latest release. After her brothers got their happily-ever-afters, it was finally time for Harlow Reed to finally get her own shot at it. Now, if you're familiar with the series, you'll know that Harlow hasn't had the easiest of times with regards to her personal life. The Reed siblings had parents who would never win any sort of awards--unless it was for worst ever--and Harlow learning about her fiancé's cheating ways is yet another reason she refuses to get too close to anyone, what more commit herself to another person. But then retired superstar quarterback Noah Weston comes along...

For the record, I've never been a fan of the whole fake girlfriend/boyfriend story line. Well, maybe when it was a new thing, but over time, it's grown tiresome. In the case of the newest More Than Words novel, the author has two main characters trying to wade their way through the sea of scandal they find themselves in. Now, having Harlow and Noah entering into a mutually beneficial agreement is nothing new, but Shayla Black has made them interesting as both a couple and as individuals. You know they whole fake relationship thing for the benefit of positive public perception is going to lead into genuine feelings. You know they're going to face trials on their way to their happy ending, and while that happy ending is inevitable, Black makes it a point to keep the story engaging. All throughout, More Than Love You held my attention, and ultimately, I was happily entertained. It gets five stars. ♥

Purchase More Than Love You on Amazon | B&N | iBooks | Kobo.