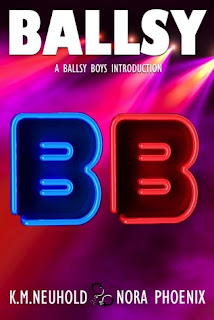 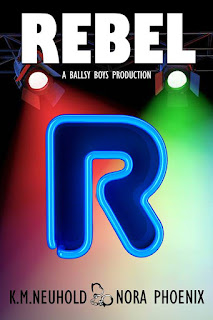 Note: The prequel is a free personal copy and the full-length novel is an ARC provided by the authors via Vibrant Promotions in exchange for an honest review.

M/M authors K.M. Neuhold and Nora Phoenix have joined writing forces for the new Ballsy Boys series. They introduce the main cast of characters by way of the free prequel, Ballsy, which can be downloaded when you sign up for it via Instafreebie. Readers meet Rebel, Tank, Brewer, Heart, Campy, and Pixie, who make up Ballsy Boys Production, a company specializing in gay pornography. We get the bare minimum here, just enough to know who the main players are, and I'm guessing that each of them will be getting their own books in the Ballsy Boys series.

The first full-length novel is Rebel, which clearly has Ballsy Boy Rebel as the proverbial star of the show. He shares top billing with college student Troy, who knows Rebel quite well, thanks to his familiarity with the Ballsy Boys' videos. When he learns that the Hendrix he's been paid to break up with is none other than his favorite Ballsy Boy, Troy decides to take advantage of the moment and he and Rebel hook up, and it's the first of many. Rebel wants a relationship, but Troy is wary. Does he want Rebel the porn star or Hendrix the guy who makes him believe in love?