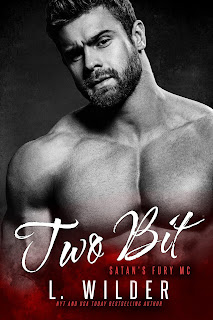 Seth Lanheart knew he wasn't meant for the well-worn path that his father had hoped he would take. Instead of heading off to college like his three older brothers, he saved enough money from his job as a mechanic to buy a bike he knew could take some long riding. He finally found home in the brotherhood that the Satan's Fury MC could offer him and he hasn't regretted it since. With his childhood moniker of Two Bit as his road name, Seth puts the club first in all things, but that doesn't mean that he won't stand up for someone when he sees they're being treated badly. That's what he does for twenty-year-old Zoe, and even though it lands him in the hospital, he would do it again. But how will Two Bit ever find happiness with the daughter of the founder of the Chosen Knights MC, a rival gang which appears to have their sights set on Satan's Fury and one which already has plans in place for Zoe?

L. Wilder's Satan's Fury MC series is like the gift that keeps on giving, and as its progressed, it's simply gotten better, and it shows no signs of stopping anytime soon (fingers crossed). In this seventh full-length installment--eighth overall--we get Two Bit's story, and his personal history isn't as angsty as has been the norm when it comes to MC romances. He's an overall good guy that loves his club and while he may not come off as the poster boy for gentlemen, he doesn't allow some guy to paw at Zoe, especially since it's clear it isn't welcomed by her. You would think that Zoe belonging to a rival club would give this story the whole star-crossed lovers feel, but nope! There's more to the whole Chosen Knights angle than you would think. Zoe's involvement with them, however, does present a set of complications that she and Two Bit (aka Seth) have to face, especially when Satan's Fury involved.

Seth has become one of my favorite Satan's Fury MC brothers. He doesn't treat Zoe as if she's some helpless female who constantly needs him hovering over her. He loves his club, but there's no doubting just how much he loves her as well, and I'm just glad that this wasn't one of those stories where a brother is forced to choose between his club and his woman. There was one particular gut-wrenching moment in the story that I wish had a happier outcome, but I do think that it was resolved in the best way that Cotton and the brotherhood could under the circumstances. Aside from the usual familiar faces we've gotten to know, there are also a couple of new ones that enter the scene, though I suspect one is going to end up as part of the Redemption series. I'm certainly looking forward to even more books about this club and everything they have to offer. Two Bit garners five out of five stars. ♥