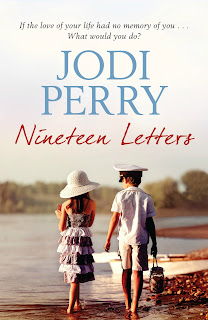 
If nineteen years is all I’m allowed, then I’ll take it. Meeting you enriched my life in so many ways, and I’ll forever cherish every second you were mine.

Never in my wildest dreams did I think the day would come that I would no longer be your forever boy.

J.L. Perry may be a familiar name to many of my fellow readers and bloggers out there, but for her latest standalone release, she's done a mini name makeover of sorts, forgoing the first two initials of her name and switching to Jodi instead. But you know that Shakesperean line that goes "A rose by any other name would smell as sweet"? Well, that's exactly the case with Nineteen Letters because it didn't matter what name this author used, it's quintessential Perry. The one difference in terms of quality is one I always hope for when it comes to authors who have impressed me--it's even better than the last five-starred Perry-penned novel I read, which was Jax. This new novel of hers is the story of love found then forgotten, but how one man's hope it'll be remembered lingered.

Braxton Spencer was only seven when he first a girl who was a year younger than him and from that moment on, Jemma Robinson changed his life forever. That was the nineteenth of January, and nineteen years later, Brax and Jem had exchanged vows and were on their way to living as husband and wife. Nineteen days after what was the happiest day of their lives, tragedy struck. Jemma may have survived the horrific accident, but it took her memory, leaving her with nary a clue as to who Brax was or the love story they shared. Such a devastating event would have broken a lesser man, but Braxton pledged a new vow--to help his wife remember. With nineteen letters chronicling their love story, Brax's one hope is to have the woman he loved most back, because a love like the one Braxton and Jemma Spencer had was the kind that was never meant to be forgotten, even if it takes a while to be remembered.

Stories like these need to come with warning that the reader should have tissues on-hand because gah! Time and again, I tried to put myself in the shoes of both Jemma and Braxton. There was a great deal of pressure on her to remember this clearly wonderful man that everyone was telling her loved her above and beyond anyone else. On the other hand, he remembered and to know everything that they had been through as a couple only to have the other person not recall a single memory was downright heartbreaking. And those letters? Double gah! Brax was...goodness me, he was everything you could hope for and somehow, the term "book boyfriend" doesn't suffice for a fictional main character like him. It would be easy to be upset with Jem, especially when she simply felt nothing towards Brax in the aftermath of her coma, but all you have to do is imagine the struggle of not remembering a huge chunk of your life, and then empathy takes the place of anything negative felt towards her. This is, without a doubt in my mind, Perry's best work so far. I highly recommend Nineteen Letters. Five-plus stars. ♥