Review: Between a Rock and a Hard Place by Clare London (London Lads #5) 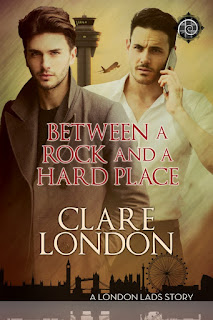 Garry stared at her, uncomprehending. He’d rarely felt less happy in his life.

“She means gay,” Max said, and he was grinning.

Clare London's collection of novellas entitled London Lads, originally released through a different publisher several years ago before being re-published this year by Dreamspinner Press, has reached its end and she certainly left the best one for last. Each of the novellas has a unique feel to it, but it's book number five, Between a Rock and a Hard Place, which has stood out. Maybe it's the fact that most of the book has the main character in the company of a seven-year-old and a ten-year-old, but there's a quirkiness to it that I found endearing and absolutely entertaining.

Garry and Will met as university students, becoming the best friends and now officemates, though the latter may not last for too long, not with Will having flown off across the pond for a promotion interview Garry knows he's going to nail. He's had many opportunities to confess his long-held feelings for Will, but after Garry unexpectedly kisses then avoids Will right before he leaves, they're at an impasse. They're going to spend two weeks together with friends, and with Garry stuck in the airport due to a delay in Will's flight, he's forced into taking a much deeper look at his feelings for Will and what it is he exactly wants by a pair of the most unlikely matchmakers ever.

Garry reacted to everything that was happening to him at the airport exactly as I would have expected him to, even when it came to Max and Emily. In less than fifty pages, we get a fair bit of character development as far as Garry is concerned. We get an idea of the kind of friendship he has with Will by way of flashbacks, and these aren't flashbacks from many years ago--these are the events that took place just a few days prior to Will leaving. Max and Emily were adorable foils to Garry, poking and prodding when it came to Will. There's a bit of a twist by the end of the book, and it was one that I didn't see coming, so that certainly added to the fun factor. Overall, I've enjoyed the London Lads series and I'm sad it's done, but Between a Rock and a Hard Place gave it a five-plus-starred farewell. ♥

Purchase Between a Rock and a Hard Place on Dreamspinner Press | Amazon | B&N | iBooks | Kobo.