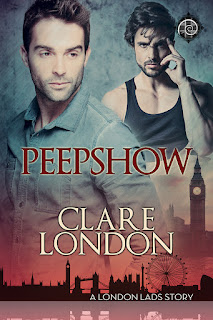 Peepshow is the fourth addition to the ongoing London Lads series from Clare London, originally published a few years ago with another publisher and now re-published by way of Dreamspinner Press. This quickie read is about Ken Cooper who spends many of his waking hours keeping an eye on the monitors that are fed by closed-circuit television cameras the security company he works for. It isn't exactly the most stimulating of activities, but Ken is about to get an unexpected shock when he glimpses a waiter for a nearby restaurant giving the camera--him--a wink, later followed by an act of a more...intimate...nature. But Ken can't get a clear look at the waiter, leaving him with no idea who it could be. Is it someone he knows or could it be a complete stranger? Either way, when he does find out who his exhibitionist is, will it mean the end to his regular peepshow or will he got a private one instead?

I've enjoyed Clare London's London Lads series, but I admit that this fourth one faltered a bit. Maybe it was because it was mostly Ken for most of the book, with pieces of his mystery waiter and his interactions with his friends here and there, all of which were entertaining. When it was just Ken, he spent a great deal of his time musing and then later, waiting for when his exhibitionist would show up so that he--and I--could get a bit of action, and by action on my end, I'm talking about some bit of excitement in the story. Ken seemed like a good guy but he was rather boring. Things certainly picked up when the identity of the headliner of his peepshows was revealed. From there, the story became more interesting and I wanted more of it when it came to an end. It left me wanting but hopeful for Ken and his guy because it was a cute and quite apt ending. I'm giving Peepshow four of five stars. ♥