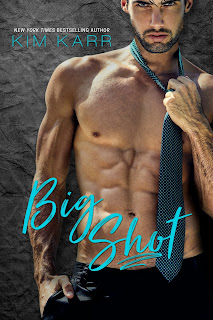 Note: This ARC was provided by the author via The Next Step PR in exchange for an honest review.

Bestselling author Kim Karr follows up Sexy Jerk with yet another great read, this one with loads of angst as well as kid-sized doses of humor courtesy of the two munchkins in the story. Big Shot is a second chance romance between Malcolm Jackson Bennett III and Hannah Michaels Crestfall, but he was just Jace Bennett and she was Hannah Michaels when they met and fell in love a decade ago. Hannah's heart belonged to Jace even when she was Jace's best friend's girlfriend. Just when they were ready to take that risk and take their love public, one discovery tore them apart. Jace goes on to fall in love again, marrying and having a daughter in the process. But fate breaks his heart once more, making him a single father when his wife is taken from them too soon. Now, his first and foremost priority is his daughter. However, fate isn't done with him yet, because just three years later, his past and present collide in a way he never expected. Hannah stirs within him reactions he thought were long gone, but she's abandoned him before. His body may want her, but Jace'll be damned if he'll let his heart need her again.

Jace and Hannah's story is told in both the present and in flashbacks, so readers get a good idea as to how deep their feelings were when they were college seniors and exactly why they clash as much as they do and why there's a great deal of assumption-making and miscommunicating going on. Both Jace and Hannah play their respective roles when it comes to the blame game as to why things ended between them the way they did ten years ago and why everything is in limbo between them now. I got why they reacted the way they did--Hannah had her preconceived notions that were formed while she was growing up and Jace had misplaced feelings of guilt for his reignited relationship with the girl he always wanted but never could claim before and seems to be unable to do so once again. I felt for both of them, as I did for their children, Jace's Scarlett and Hannah's Jonah, but even as they had their challenges, I liked how they overcome it all and became a cohesive family unit. I do wonder, though, why Hannah would retain her married name even after what he ex had done to her. Go figure. Big Shot gets four stars. ♥

Read my reviews for the Sexy Jerk series: