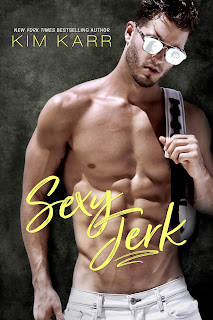 As much as Tess Winters may have thought of Nick Carrington as a jerk--albeit a sexy one--the man--and more importantly, this book--left a fabulous first impression that lasted all throughout. Yes, Kim Karr has once again tickled my fancy and had me grinning in bookaholic satisfaction with her latest release, Sexy Jerk. She gave readers two extremely likable main characters in Tess and Nick and a love story that lived up to, at the very least, what a romantic comedy read should be. All my Karr reading experiences have been of the rom-com variety, but if her books in other genres are as good as No Pants Required onwards, then I seriously need to get my hands on them.

Tess Winters doesn't think much of Nick Carrington. Okay, maybe that's not wholly true. She may not think he's the world's greatest human being, but there are certain things about the sexy jerk that she can't turn a blind eye to. She needs to try and get along with him, for the sake of their mutual friends's son that they're babysitting even though she's prepared to think of it more as suffering through the entire two-week experience. Ah, the things you do for your friends, right? But the more she gets to know him, the more Tess's opinion of Nick shifts and she wonders if she got him wrong. Maybe he isn't as big of a jerk as she first thought, but he's definitely still sexy. But even though Tess may want to get to know him better--spend more time with him--will Nick want the same thing?

Can Kim Karr do no wrong? My opinion, of course, is qualified by the books I've read--No Pants Required, Bedwrecker, Hollywood Prince, and now, Sexy Jerk--but Karr also comes highly recommended by one of my book buddies, Mara De Guzman. Karr has paced her latest release admirably well and she doesn't miss a beat. It's low on angst--but being the angstaholic that I am, I'm a happy camper that there was enough to satisfy me. Admittedly, there were some parts of it that felt out of place, but overall, I enjoyed the story. I seriously liked Nick and Tess and found their romance to be rather adorable. To be honest, I probably liked--LOVED--Nick more than I did Tess, but that's what happens when I come across absolute book boyfriend material in one Sexy Jerk. I'm giving it four stars! ♥