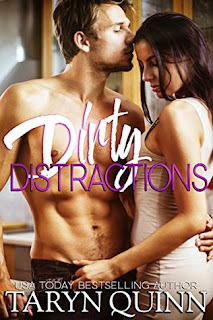 Dirty Distractions is the first in the Afternoon Delight series from Taryn Quinn, the pseudonym used by bestselling authors Cari Quinn and Taryn Elliott. Originally written by Cari Quinn and released in 2013 through Samhain Publishing, I'm not entirely sure if there were any changes made in this second edition, not having read the first one. It's a May-December romance between forty-two-year-old ornithologist Sara Carmichael and nearly thirty-year-old mechanic and garage owner Brad O'Halloran. As tempting as Brad may be, Sara refuses to give in to his flirtation. He is, after all, more than a dozen years younger than her and the younger brother of her best friend Kim. Living in one house, however, makes avoiding one another difficult. When Sara falls sick, part of Brad's caregiving involves some VERY intimate TLC. But Sara can't get over the age difference while Brad believes he'll never meet Sara's standards. Will these two realize what they have is more than some temporary dirty distraction?

This series starter was a fairly quick read and it had the steaminess I've come to expect from the writing duo of Quinn and Elliott. I liked that the age difference had the woman older than the man and that it wasn't just a year or two or five. Of course, it's that very same age difference that has Sara taking one step forward and two steps back when it comes to Brad, and it got to the point where I was frustrated with her and felt bad for him. The two did have some chemistry, but I felt they needed a bit more of the romance so that it wasn't just about them being compatible in the bedroom. The ending felt like a happy-for-now, and it was a tad rushed, so I was kinda-sorta hoping for an epilogue to give the story a more satisfying close. Overall, though, I liked the male main character, and the story was paced well save for the rushed end. The sneak peek into book two has me curious as to what happens to Kim, Brad's sister, and her own cougar-like experience. I'm giving Dirty Distractions 3.5 out of five stars. ♥