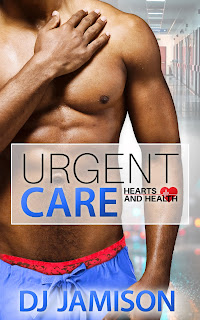 Urgent Care is the third novel in author DJ Jamison's medical romance series, Hearts and Health, and features thirty-year-olds Xavier James and Trent Cavendish. Twelve years ago, Xavier and Trent's plans of heading off to college then medical school ended with Trent pushing through with said plans while Xavier chose to remain in their hometown of Ashe in order to help out his family. Both went in different directions with broken hearts, and while they led separate lives during those dozen years apart, Trent has returned to Ashe, needing a change of pace from the constant grind of being a surgeon and wanting to make amends and show Xavier they deserve a second chance to be together. But nursing student Xavier is wary and would rather focus his attention on finishing up everything that's required of him in order to get his degree. He isn't too sure he's ready to simply forgive his ex and give their relationship another shot. But Trent is persistent and he's prepared to wait Xavier out, hoping that when everything is said and done, he'll have proven how much he's changed and that he's loved no one else but Xavier.

This series has steadily and surely continued to leave me impressed. I read the three books back to back to back and DJ Jamison doesn't just throw out a line or two about the medical field that at least one of the main characters in each book is part of and stuffs everything else with sex and maybe bits of romance. Nope, we get a story each and every time and you can tell that the author did her research when it came to medical practices and procedures and terminology. Xavier and Trent's story is a second chance romance, and while it's easy to point fingers and blame Trent for how their relationship fell apart all those years ago, Jamison gives you a clearer and broader picture as everything plays out, bringing certain truths to light and highlighting once something I personally believe--that there are two sides to every story and that it takes two to make or break a relationship. I honestly liked how things played out between Xavier and Trent and how, at the end of the day, they showed that true love is worth taking another chance on. Fingers crossed that this is NOT the last of this series. 4.5 stars go to Urgent Care. ♥