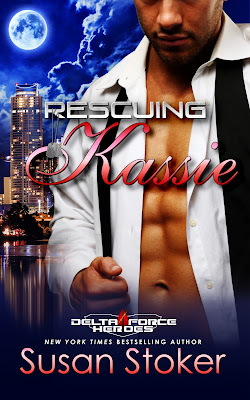 About Rescuing Kassie
Graham “Hollywood” Caverly feels the chemistry with Kassie Anderson in the emails they’ve been exchanging through a dating site. When they finally meet in person, and that online chemistry proves to have real-life sizzle, he knows she’s the one. He couldn’t be happier when their first date, at an annual Army Ball, goes better than he could have imagined. Until Kassie drops a bomb.

Kassie doesn’t want to approach Hollywood on the dating site, but threats to her family leave her no other choice. She definitely doesn’t want to fall for the man. But fall she does. Hard. After she admits the ruse—and after some understandable anger on both their parts—Kassie wonders if, in Hollywood’s arms, a happy future is within her grasp.

But her past always finds her, and in Kassie’s case, that’s a dangerous proposition—because she’s connected to an old enemy of Hollywood’s Delta Force team. Very intimately connected… And it will take Hollywood, his Delta brothers, and even some outside help to do what should have been done the first time—eliminate the threat once and for all. 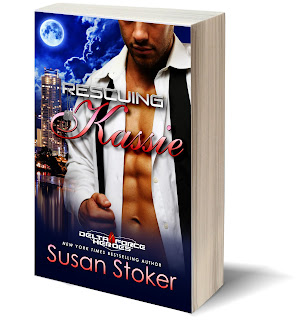 New York Times, USA Today, and Wall Street Journal bestselling author Susan Stoker has a heart as big as the state of Texas where she lives, but this all-American girl has also spent the last fourteen years living in Missouri, California, Colorado, and Indiana. She's married to a retired Army man who now gets to follow her around the country.