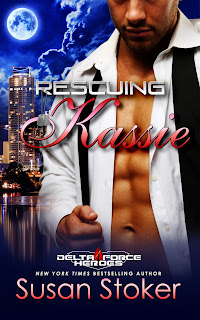 When Graham "Hollywood" Caverly mentioned he had been having email conversations with a woman named Kassie in Marrying Emily, I was curious to see where there story would be headed, and when I finally read the blurb for Rescuing Kassie, that curiosity doubled. Now that I'm done reading, I have to say that this fifth installment in Susan Stoker's Delta Force Heroes series is my favorite one so far. The Kassie Hollywood was talking about in book four is Kassie Anderson, and while they do meet online, this isn't exactly the online romance you'd think it is.

Thirty-two-year-old Army Ranger Graham Caverly is nicknamed Hollywood for a reason, but all he wants is what his other friends and fellow Delta Force members have--a woman who loves him for him, someone he can come home to. Sure, he's good looking but he hopes to find a woman who'll see beyond that, and he thinks he's found it in thirty-year-old Kassie Anderson when they meet through an online dating site and go on to exchange emails. But on the night they finally meet in person--one night that held such promise--Hollywood learns Kassie's true motives.

When her deranged ex-boyfriend threatens the safety of her younger sister, Kassie Anderson believes she has no other choice but to agree to his demands. Reaching out to Graham Caverly and gaining his confidence was supposed to be a means to an end, but Kassie never expected to actually like the guy. She knew that confessing the truth could lead to the abrupt end of whatever's been developing between her and the Army Ranger, but when tempers cool and they focus on their situation, Hollywood and Delta Force team vow to rescue Kassie from her ex.

Thank goodness the secret Kassie was keeping was drawn out until the very end. Too many books take that route and I'm just glad Susan Stoker decided to go down a different--and far more satisfying--path. Hollywood's reaction to what Kassie said felt real--none of that "Aww! It's okay! I totally understand" crap. Where their relationship goes from there and how they handle what Kassie's ex has planned for Hollywood and his Delta Force teammates was paced rather nicely, so that by the time I get to the climax of the story, the anticipation has quietly but surely built.

The Delta Force Heroes keeps getting better with each new release Stoker has, not to mention I've grown increasingly curious about her two other series--SEAL of Protection and Badge of Honor: Texas Heroes--because characters from there regularly show up whenever the Delta Force guys request for assistance. Hollywood and Kassie have certainly raised the bar for the couples to follow but with the peek into Dane "Fish" Munroe and Bryn Hartwell's Idaho-set story, it's looking like book six is ready to give Rescuing Kassie a run for its five-starred money. ♥

Read my reviews for the Delta Force Heroes series: