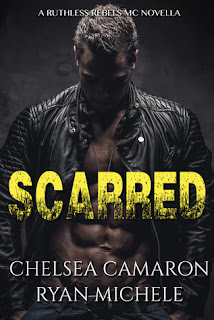 Scarred is the third and latest addition to the Ruthless Rebels series of stories brought to romance readers by the writing team of Chelsea Camaron and Ryan Michele. This is also the third novella that carries with it a second chance love story theme, but again, the circumstances that surround the couple here are different from those that came before them. At eight years old, Whitton Thorne and Roelyn Duprey were the best friends. They would fall in love, but on what was supposed to be the night that was a turning point point in their relationship, Whitton would up and leave Roe, choosing to be by his twin brother Waylon's side. It's been ten years, but circumstances have led Whitton and Waylon--now members of the Ruthless Rebels MC and known as Skinny and Triple Threat or TT--to make the journey from Alabama to their hometown of Blakely, Georgia. Those circumstances have put Roe directly in Whitton's radar, as well as those who seem to be after Whitton's club. He's created a new life for himself and has a family in Alabama, but he knows he can't leave Roe behind again. Will Roe give them a second chance together?

Ooh! I do believe I've found my favorite story so far in this series! I loved Whitton and Roe and I understood what motivated him to leave her a decade ago. His brother needed him and that bond that only twins have is unlike any other. I admired Roe for giving Whitton a piece of her mind when he tried to push his way back into her life as if nothing had happened, but I wish it had last longer than it did. The additional aspect of foster care and how it was interwoven into the story was done really well, and I thought little Marlayna was an adorable if not wistful peripheral character. Another MC also makes a surprise cameo appearance in the story, but I won't say who it is. Yep, I'm a tease, but hey, consider an incentive of sorts, especially if you're familiar with either author's past work. This third book ends on a cliffhanger of sorts, almost like an introduction to the fourth novella to be released--Waylon's story. I mean, come on! You can't have just one twin have his happily-ever-after, right? And now I'm all curious as to where Waylon's off to and how his own story'll play out. Gah! I'm giving Scarred 4.5 out of five stars. ♥