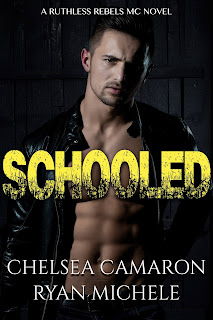 Schooled is the fourth and latest Ruthless Rebels MC series and it picks up where things were left off in Scarred. Authors Chelsea Camaron and Ryan Michele give us the story of the other Thorne twin, Waylon, who goes by the road name Triple Threat. The series itself is about second chances, and here, Waylon gets his second chance with the one girl he's never forgotten but felt he was never good enough for--Jessica Quemuel. He believed going their separate ways would allow both of them to live better lives, but the one thing he could never have imagined was Jessica would end up suffering a far worse fate than Waylon thought possible and at the hands of the very person who brought such pain and heartache to his and his twin brother's lives. Waylon wants nothing more than to rescue the girl he's always loved and give his brother the peace his deserves, but can Waylon save himself as well?

Well, I certainly wasn't expecting Waylon's story to start off the way it did! I knew that it would involve his mother, but damn, the woman's evilness clearly knows no bounds. I felt for Triple Threat (aka TT) because it was obvious that he was carrying a heavy burden of guilt on his shoulders, feeling responsible for what happened to Whitton (aka Skinny) for too many years and then what happened to Jessica for those two years. The first half of the book has to do with Waylon and Whitton's mother, but the second half took me by surprise, what with that twist that the writing duo of Camaron and Michele threw in. Talk about keeping me on my toes because I didn't see that one coming at all. I have no major issues with the way everything played out, though I would have liked to have delved more into how Jessica overcame everything that she had endured. Still, Schooled satisfied me and gets four stars. ♥

Read my reviews for the Ruthless Rebels MC series: