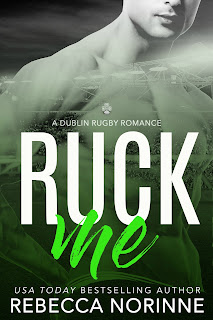 Twenty-one-year-old Aoife O'Shaughnessy has just shocked twenty-two-year-old Eoin McGrath. He can't quite wrap his head around the newly discovered fact that this girl he grew up with is still a virgin. However, her choosing a guy not worthy to even breathe the same air as her has Eoin thinking thoughts he never thought possible, not with someone like Aoife. If she wants to punch in her V-card then by God, Eoin's up to the task. But how do you convince the girl that's seen you as nothing more than a friend and a sometimes nuisance to hop into bed with you and get the deed over and done with? They've got their friendship to consider as well as Eoin's own friendship with Aoife's brother. But once they agree to get "it" on, it's made clear that this is purely physical between them...that is, until it feels like more. Falling in love was inevitable, but the consequences? Life-changing.

My expectations were rather high for Ruck Me, the second novel in Rebecca Norinne's Dublin Rugby, but such is the case when she opened the series up with a winner in Trying Sophie, which also happened to be my first read from the author. Eoin and Aoife were among the motley crew of supporting characters that were introduced in the series starter, and theirs is a friends-to-lovers type of romance with a healthy dose of humor thrown into the mix. Their story is told in two parts: the first involving how they move from friends to lovers, and the second when something unexpected happens that throws them both off their game and forces them to deal with the new situation as well as decide whether what they have is something worth fighting for. These two were fun and flirty but they did a lot of growing up. Ruck Me is a 4.5-starred sports romance, and I can't wait for more Dublin Rugby. ♥

Read my reviews for the Dublin Rugby series: