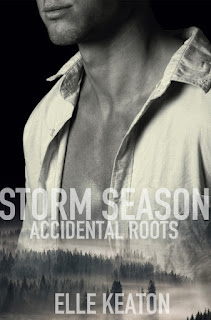 Storm Season is author Elle Keaton's introduction to readers to her Accidental Roots M/M romantic suspense series, which takes place in the town of Skagit in the state of Washington. Book one is about thirty-five-year-old veteran federal agent Adam Klay and thirty-four-year-old freelance web designer and occasional online writer. When his father suddenly dies and leaves everything to his estranged son, Adam finds himself back in his hometown, the same one he hasn't been back to in almost two decades. He's not exactly looking forward to handling his father's affairs, wanting instead to go back and focus on the case that his team currently has on dock, but his boss has put his foot down, believing this is something Adam needs to do. Just a couple weeks should do, but then Adam meets the awkwardly shy Micah Ryan. The attraction is mutual, but it goes beyond that, and soon, Adam isn't complaining too much about being back in Skagit. When Micah's safety is put at risk, however, the well-trained federal agent in Adam comes alive, and he'll make sure the man he's fallen for and his hometown are safe.

This was an interesting beginning to what's looking like an intriguing series. There was a pretty good balance between the romance and mystery slash suspense parts of the story. Neither Adam nor Micah have exactly been on the lookout for long-term relationships in the past, what with Adam's work and Micah's grief, and you wouldn't necessarily think that the broody federal agent and the bumbling web designer would have much in common, but they actually came off as endearing and well-matched, with both men evolving as the story progressed. As far as the story itself, there were times that it would go in one direction and then go off on a tangent or even abruptly end at a particular and awkward point in a chapter. But with what was happening between Adam and Micah and to Micah himself, I kept going. The story had my attention and the main characters, along with a number of memorable supporting ones, were easily likable, so there was a measure of investment involved. While Storm Season had a tendency to meander, the essentials were enough for me to give it four stars and read the next one. ♥