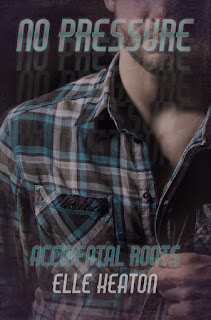 No Pressure is the second novel in the Elle Keaton-penned Accidental Roots series set in the town of Skagit, Seattle. While this does feature a new couple, it does carry over a story arc that began in the first book, so I'm recommending you read Storm Season first, mostly to get a good foundation and understanding of the town and the recurring characters. In this second book, the attention is all on twenty-six-year-old car mechanic and restorer and garage owner Buck Swanfeldt and twenty-eight-year-old nurse Joey James, both of whom were introduced in the series starter. When Buck walks up to Joey at the produce aisle of their local supermarket, it's pretty obvious that Joey doesn't remember him from high school. However, circumstances have Buck's and Joey's paths crossing yet again, only this time around, it's clear that Joey has gotten himself in some trouble. Keeping an eye on a guy he's crushing on shouldn't be difficult, but Buck realizes that Joey's been keeping--albeit involuntarily--dangerous company. Buck and Joey are just getting started on being together, but outside forces could end everything quickly.

The pacing of this second book was better than its predecessor, although I do confess that I liked Adam Klay and Micah Ryan from Storm Season more than I did Buck and Joey, although I liked the latter couple well enough. Joey and Buck end up getting a tad too involved in the illegal activities happening in their fair town. I'm not going to say what those activities are exactly--because hello, spoilers!--but if you've read the first book, you may have an inkling. Let's just say that these two have a bad tendency of getting themselves too involved, which then leads to getting one or both of them into trouble with either the good or bad guys. As was the case in book one, the author did a great job balancing things out between the romance and suspense aspects of the novel, and there also happened to be less angst here. The series arc has yet to be resolved and I know there's a third book in the offing, but there are also a few more supporting characters I wouldn't mind getting to know even more. In short, hopefully, we get more than three books because this series is so growing on me! I'm giving No Pressure four stars. ♥

Purchase No Pressure on Amazon.